Attack of the cicadas 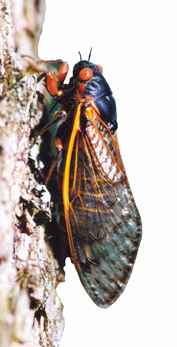 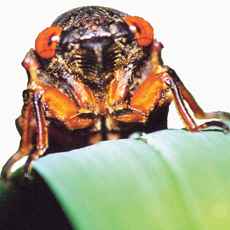 It has been the talk at all the water coolers and campuses across the tri-state.

No, it is not about the newest flick in the theater – the talk centers on the imminent cicada invasion in the area.

It has been 17 years since they last visited, and you can almost hear them coming – humming that is.

Dr. Gene Kritsky, biology professor at the College of Mount St. Joseph, said that at least five billion cicadas are due to attack southwest Ohio at any time now.

But what are these things?

Brood X cicadas, the 17-year cicada (found in Pennsylvania, Illinois, Indiana, Kentucky, Michigan, Ohio, and Tennessee, to name a few) live beneath the ground as nymphs.

While they are underground, the cicadas spend their time tunneling and feeding on juices from tree roots.

As if signalled, the nymph emerges to become an adult through a molting process, wherein the nymph sheds its outer skin layer.

As an adult, the cicada’s only goal is to mate.

It’s not such a bad life.

Once a cicada has mated, it dies. But it leaves up to 600 offspring to begin their own survival process mere inches under the ground.

According to Brian Hamrick, a reporter for WLWT Eyewitness News 5, the cicadas are due to visit around May 21.

However, since temperatures have already reached 64 degrees, you may be able to spot an “early-bird” cicada on small trees and shrubs, he said.

Many who lived in the tri-state area in 1987, the year the cicadas last came, have some sort of memory of the invasion. Everyone has there own tale, be it good or bad.

Arianna Perkins, vice president for environmental affairs of Northern Kentucky University’s Environmentally Concerned Organization of Students (ECOS), was a six-year-old when the cicadas came and remembers “the stupid boys in elementary school used to throw them at the girls.”

But they’re so scary!

According to the University of Michigan’s Museum of Zoology, cicadas are harmless. They do not attack people, they do not bite and they do not sting defensively. Even knowing all of this, Perkins still remembers what it was like, and it makes her want to hide in her room until the humming is gone.

For those of you who were lucky enough to never have come face-to-face with a cicada: Once you hear that irritating chirp, which sends shivers up your back like nails scratching on a blackboard; see an evil-looking insect about 25 to 50 mm in length, with prominent, bulbous red eyes, you’ll never forget the sight.

Especially when the little buggers fly right into your hair and eyes, because they don’t have great eye sight.

You’ll be forwarned to the cicadas coming because of the unique acoustic signals the males make to attract a mate, John Foltz from the University of Florida’s Entomology Department said.

Since male cicadas are the only ones that produce the loud clicking sounds, it is easy to tell the sex of a cicada.

You want me to look where?

If the sounds a cicada makes aren’t enough for you and you (by some strange scientific perversion) wish to discover more about what the cicadas look like, then an interesting thing you can look for is “letters” on their translucent orange-veined wings.

Dan Century’s Cicada Mania Web site denies this old wives’ tale, but does agree that letters can be found on a cicada’s wings.

There will be three species of emerging cicadas, ranging in size from one to one and half inches long. Different species have different life cycles, which is why some come out every year, not every 17 years.

However, this year is unusual because such a large number will make their appearance at the same time.

Orchard and nursery owners should avoid planting young trees and shrubs during this year’s cicada invasion. Cicadas feed and plant their eggs on branches, which could result in flagging of saplings, or breaking of peripheral twigs.

Mature deciduous trees and shrubs usually survive, despite the browning of the leaves right after the invasion. It is best to protect saplings by covering them with screening material, not pesticides.

So, what about my summer?

You can trying spraying on the bug repellant to keep the cicadas at bay. Or you can stay inside and as Assistant Professor Richard Boyce of the Department of Biological Science recommends, “Stock up on your favorite CDs and try to drown them out.”

“Run for the hills, (or for) the west. There aren’t any periodical cicadas there,” Perkins said.