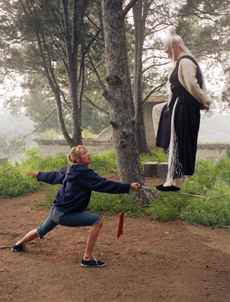 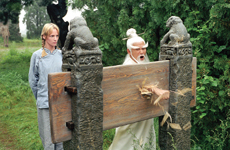 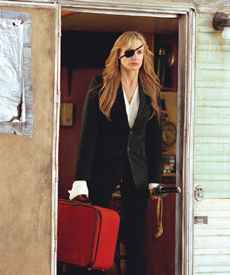 Quentin Tarantino masterfully creates characters that most movies would portray as villianous and vile. There are few contemporary storytellers that can make us feel for hitmen, burglars, and dope fiends. But, Tarantino does it.

The filmmaker’s latest work, “Kill Bill,” is no exception.

Take the character of The Bride, created by Tarantino and the star of this film, Uma Thurman. In Volume 1, audiences cheered for a character that violently dismembers an entire room full of sword-wielding hitmen.

A dose of this same moral ambiguity fuels the storyline of the conclusion to this vengeful cycle.

In fact, a majority of the musical score for Volume 2 is the work of Italian composer Ennio Morricone, who scored Sergio Leone’s most famous western “The Good, The Bad, and The Ugly” as well as numerous other films of that time period.

Though both volumes are heavily laden with influences from each, the final installment is filled with more classic western grittiness than the dusty back roads of the film’s arid desert setting.

After a brief recap of the The Bride’s handiwork in Volume 1 the movie launches in to Chapter 6 titled “Massacre at Two Pines.”

The black and white flashback sequence details the moments leading up to the bloody introductory wedding scene of the first film.

This is also the first time audiences get a good look a Bill (David Carradine) and The Bride (Uma Thurman) together.

The shots are tight close-ups and, when coupled with the heavy air of silence, create the feeling of an almost intimate tension between the two. T

his poignancy is offset by the knowledge of Bill’s sadistic intentions and the appearance of the members of the heavily armed Deadly Viper Assassination Squad.

Having dispatched of two former colleagues, O-Ren Ishii (Lucy Liu) and Vernita Green (Vivica A. Fox), The Bride continues her hunt for the remaining members of her “Death List 5.”

At the beginning of the next chapter, the black and white film stock is traded in for color shots accenting rich reds and oranges of the Southwest desert.

Budd (played by Michael Madsen, a veteran of Tarantino’s work) is Bill’s washed-up younger brother and former member of the Deadly Viper Assassination Squad – he’s also next on The Bride’s list.

Having been one of Bill’s best assassins, Budd is now reduced to working as a strip club bouncer and living on bottles of booze.

The trailer-trash character of Budd provides a poor, empty and remorseful counterpoint to Bill’s blood-thirsty, consuming desire to stop The Bride’s rampage.

The introduction of this chapter again focuses briefly on the Bill-Bride relationship. The Bride listens intently with a childlike innocence and awe as Bill recounts stories of the legendary master Pei Mei’s deadly techniques.

As a tribute to the kung fu theme of a warrior in training with his or her master, Tarantino’s nonlinear plot focuses back to a segment on The Bride’s martial arts training with Master Pei Mei, played by Gordon Liu.

Liu is a veteran of many classic martial arts films, perhaps the most classic being those produced by the legendary Shaw Brothers such as “The 36th Chamber of Shaolin,” also known as “The Master Killer” when it was later re-dubbed in English. Liu also played Johnny Mo, the leather-masked leader of the Crazy 88’s, in Volume 1.

Liu plays the white-bearded Pei Mei with a high degree of technical expertise. These scenes feature some of the most perfectly executed fight choreography of the entire series.

Chapter 9 flashes forward to Budd’s trailer in Barstow, Ca., where Elle Driver (Darryl Hannah) is en route for an exchange with Budd.

After Budd is dispensed by a vicious encounter with a black mamba, Elle and The Bride duke it out in the catfight to end all catfights.

Tarantino heightens the drama by drawing out the shots and choreographing cuts with the dramatic, building score during the scenes leading up to the first blow between the mortal enemies.

In the final chapter, The Bride and Bill meet face-to-face once again, for the final time. Tarantino’s script draws heavily on the mythology of the superhero and, again, the spaghetti western themes prevalent throughout Volume 2.

Many Tarantino fans were disappointed when both volumes were released separately, as opposed to one single three-hour epic. I would have included myself in that category, until I saw Volume 2.

The hardcore Shaw Brothers martial arts action and slasher-influenced blood of Volume 1 has given way to Tarantino’s unique ability to tell love stories about killers.

Never since Jules and Vincent of “Pulp Fiction” has the silver screen seen a group of vicious assassins presented with such basic, raw human emotions.

Though Bill is presented only as a dark sadistic figure in Volume 1. Tarantino develops his character into someone that may not be so easy to classify as a villian, despite his sick and twisted ways.

It goes without saying that Quentin Tarantino is a movie buff. Much has been written on his various influences for “Kill Bill” and his other films. But it is not the outside influences that make his films so captivating.

Tarantino’s inate ability to write characters for the screen is the true testament to his love of film. He is detailed and exacting, and manages to never lose sight of his true artistic vision.

It’s a good thing that Tarantino truly develops and produces his films.

That makes waiting for years just to catch another one of his movies worth the price of admission.