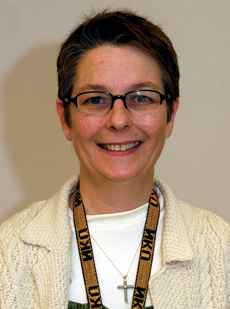 The position has been vacant since Dr. Sally Jacobsen stepped down as Interim Director.

Kattus won’t officially take over as director until the summer.

Kattus is currently the Art History Coordinator and will continue to teach a limited number of art classes.

Kattus was encouraged by other faculty to take the position, but realized that the job would be very demanding.

“I don’t know if I can handle this, I failed walking on water,” Kattus said.

Kattus brings many ideas for the Women’s Studies program.

She would like to see the program network more with the community, especially becoming more active with the National Women’s Studies Program.

Getting students excited and involved in Women’s Studies is another goal Kattus hopes to achieve.

She plans to coordinate activities that are fun, educational and involved with community outreach.

There is even the hope of re-opening the Women’s Center, formerly located in the University Center.

Expectations are high for Dr. Kattus, as there is talk of developing a Women’s Studies major in the near future.

According to Vice Provost Paul Reichardt, drawing in new faculty members is key to the success of the Women’s Studies program. The program itself has seen a substantial growth. Registration for Women’s Studies courses increased 35 percent from Fall 2002 to Fall 2003 according to Reichardt.

“You learn so much about people, not just women, in Women’s Studies classes,” Bucklin said.

The program helps broaden people’s perspectives, which is important in a college education, according to Bucklin.

Kattus is looking forward to taking over the Women’s Studies Program. “She is a very engaging and dynamic person with lots of new ideas and perspectives,” Reichardt said, adding that a reception is being planned prior to the fall semester to welcome her.