‘Invalid’ is final show of season 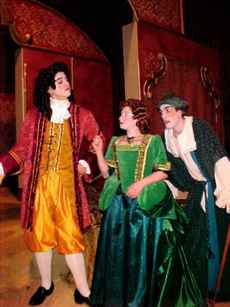 Nathan Gabriel, Mindy Heithaus, and Andrew Bernhard star in ?The Imaginary Invalid,? which takes a comedic look at the art of medicine and its patients.

It’s been a season of “the best shows on the road,” with Northern Kentucky University’s department of theatre and dance traveling to such places as Tennessee in “Five Women Wearing the Same Dress,” to Israel in “Jesus Christ Superstar,” to London in “Lucky Stiff,” to Massachusetts in “The Crucible,” and to Vietnam in “A Piece of My Heart.”

The road finally comes to an end in France in the latest addition, “The Imaginary Invalid,” also known as the “Hypochondriac.”

Director Joe Conger described a hypochondriac as “someone who believes in the medical profession, and everything the profession tells him.”

Conger added that the person would believe in the profession even if the doctors were unscrupulous.

“Hypochondriac” is the 300-year-old play of French playwright Moli