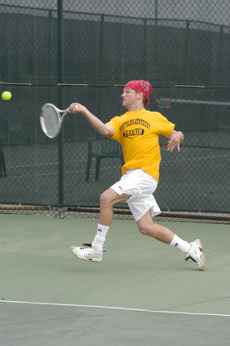 The NKU men’s tennis team ended its GLVC play with two strong wins over Southern Indiana and Bellarmine this weekend.

The victories cap off a second consecutive season in which the Norse finished undefeated in regular season conference play. NKU now stands at 13-3 overall, and 8-0 versus conference opponents.

This was also the first season that the men’s tennis team received a national ranking. They are ranked number 37.

“We want to repeat and win the conference tournament,” Crawford said. “Then hopefully we can carry that over to the NCAA tournament and see where it goes from there.”

NKU had a strong showing, defeating the Eagles 7-2.

“This is some of our toughest competition,” Crawford said before the match Friday. “It’s very important we be able to come out on top to close out the conference matches.”

In Sunday’s match the Norse dominated Bellarmine defeating them by a score of 9-0.

Benjelloun defeated Phillip Merill 6-0, 6-1, while Herzog and Pawelec both blanked their opponents 6-0, 6-0.

NKU takes the number eight seed on Friday at 9 a.m.. The tournament will conclude on Saturday.