Kerry urges students to get involved 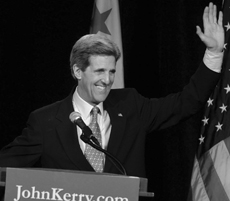 Sen. John Kerry, D-Mass., wants college students to vote in November’s presidential election in order to make their voice heard in America, and he embarked April 12 on a nationwide campus tour to encourage student civic participation as part of an initiative called a “Compact with the Next Generation.”

In exchange for increased student involvement, Kerry has promised to work for more affordable tuition costs.

His plan includes a yearly tax credit for students of the first $4,000 dollars of tuition, and a “Service For College plan,” whereby students who commit to two years of community or national service would earn in return the equivalent of their state’s tuition rate for a four-year public university. Kerry said the money would be paid directly to the student for use at the university of their choice.

“This race is a choice between common sense and a failed economic policy,” Kerry said.

“We want students to begin to realize their ability to affect the outcome of this election.”

Kerry has also committed to giving more federal money to states to help keep tuition low. He attributed a national increase in tuition of 28 percent during the last three years to President Bush’s tax cut.

Kerry said that 220,000 students have been “priced out of college this year,” and proposed a $25 billion one-year state aid program to alleviate that problem. He said inflated tuition rates are a direct result of decreased federal funding to states.

“I will keep the tuition tax credit for students,” Kerry said, but added that other funding initiatives could be reduced due to “budget realities.”

“I guarantee that it will be there through this century, for your generation and the next,” he told college journalists.

He said that the funds would be “just fine, if we’re fiscally responsible, and added that, “I do not intend to privatize Social Security.”

Kerry embarked April 12 on a tour of four northeast universities, where he will detail his contract and encourage students to register to vote.

More information can be found at www.johnkerry.com.