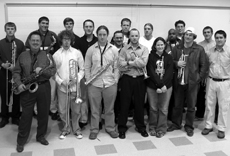 The Northern Kentucky University Jazz Ensemble presented its spring concert on April 8 in Greaves Concert Hall, where some special guests performed in support of the group.

The Campbell County High School Jazz Ensemble, under the direction of Brian Hogg, opened for the group with a fine performance of some big-band standards.

University of Cincinnati College Conservatory of Music intstrutor and trombonist Bill Gemmer sat in with the group for its performance.

Gemmer, a Newport native, is renowned in the Cincinnati jazz scene as one of the founders of the Blue Wisp Big Band.

The harmonized blues lines of the brass complimented the medium-tempo swing of arranger and composer Neal Hefti’s “Cherry Point.”

And the group followed this tune up with another Hefti standard ballad called “Lil Darlin.”

The group approached the ballad with a high degree of taste and stylistic dynamics, demonstrating the range of these young students.

The tightly voiced harmonies were lush and balanced from section to section.

Don Menza’s “Groove Merchant” closed the set, and allowed the students an opportunity to have some fun with the funk-based rhythms and melodies.

For a high school group, the talent level was impressive

(Note: It would have been more impressive if, when they were finished, they didn’t sit behind me and talk loudly for the remainder of the show).

After a brief set change, the NKU Jazz Ensemble launched into the fast swing and sonically intricate bop harmonies of Billy Byers’ “Battery Charger.” The tune was fueled by accurate rhythmic work from drummer Mike Johns, who also provided the only improvised passage of the song with his solo.

Saxophonist Wayne Shorter’s “Yes or No” continued the swing vibe.

The 14-bar form is somewhat irregular, but the group held it together with ease. The 12/8 Afro-Cuban breaks provided contrast to the rigid swing of the arrangement.

The straight-ahead blues of Duke Ellington’s “Jack the Bear” featured bassist Todd Hale. Hale’s solo and was executed with impeccable timing. It carefully outlined the blues harmonies of the arrangement, hearkening back to the legendary style of Ellington’s most famous bassist, Jimmie Blanton.

Next, Bunte and four of his fellow saxophonists performed a song written for the group Saxology entitled “Viper Cipher.”

Bunte and the quintet put on a saxophone workshop as they simultaneously launched into the rather dissonant, angular melodic line at break-neck speed.

The rhythm section provided a solid vehicle for the improvised sections and the soloists took full advantage of the space, delicately weaving harmonies into complex melodic inventions.

For variety, the program featured a smaller jazz combo setting with Bill Gemmer on trombone and saxophonist Bob Roden accompanied by the Jazz Ensemble rhythm section.

The combo played the jazz standard “I Thought About You.” Gemmer’s solo varied from a smooth ballad feel to some rather interesting honking and squealing.

Roden seemed lost; his solo lacked an overall cohesiveness and it sounded like he was struggling to fully exploit some of the simple motifs he established early in the solo.

Harris’ creative composition mixed the Cuban elements, such as rhythmic vamps and syncopation, with hints of a blues influence. It was an interesting selection and had a solid groove.

Performing and studying the work of originators, like Ellington and Basie, is paramount to the understanding of big band jazz. But the group would benefit from exploring more of the newer territory of the big band repertoire, however.

The highlights were definitely the more original songs like the sax quintet’s “Viper Cipher” and “El Gatote.”

An inflection of modern jazz elements such as those present in these songs would be a greatly appreciated addition to the style of this talented group of musicians.

Overall, the show was an impressive presentation of America’s art music from two growing ensembles and dozens of talented performers of all ages.