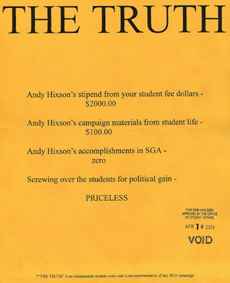 Fliers discrediting former Vice President for Public Relations Andy Hixson and his running mate, Sen. Jeff Iker, were removed from the Northern Kentucky University campus on April 7, after university officials discovered the fliers had fake stamps of approval from the Office of Student Affairs.

Posted only a week before the Student Government Association election, the fliers removed all had “the truth” written across the top, with information opposing Hixson’s election below. However, all of the fliers also had a disclaimer at the bottom, stating, “The truth is an independent student voice and is not representative of any SGA campaign.”

Students saw the fliers and notified Steve Meier, associate to the dean of students, who determined that the fliers violated the Student Code by forging a university stamp.

“It seems by looking at the flier that somebody took a stamp that was on a previous flier that was posted on campus and re-imaged it on this flier,” Meier said. “On some of the fliers you could see there was an outline where it looked like they had cut it out and put it on there. The [number] one [in the date] is also obviously altered. That’s the only proof that we have.”

According to the NKU poster distribution policy, “All posters, flyers, handbills, and banners to be placed on non-academic areas of the Northern Kentucky University campus must be authorized and stamped by the Dean of Students designate, University Center Management, University Center Information Desk, 100A. The Dean of Students’ stamp indicates review of the party requesting permission to post notice and does not indicate an endorsement of content.”

The stamp shows that the sign “has been approved by the Office of Student Affairs” and is void after 30 days at most. University Center Management must also receive a copy of the posted materials to keep on file. Facility Coordinator Terri Bridewell said the fliers against Hixson were never brought to the Information Center for authorization before being posted, however.

Meier said if he learns who posted the fliers, consequences are inevitable but may vary depending on the circumstances.

Hixson’s opposing candidate Executive Vice President Eric Fegan said he had no knowledge of the fliers until Meier brought them to his attention. Fegan said he knew it looked bad on his part because of the similarities of the use of the phrase “the truth” in the Hixson fliers and campaign materials the Fegan/Pollitt team posted a month ago.

“I saw a lot of Fegan/Pollitt signs that said ‘the truth,’ you know, everywhere, and it was just funny to me that these said at the top ‘the truth’ and then lies about me and things that were bad about me,” Hixson said.

“Whether they came from Eric or not, I don’t know, but had there been signs about Eric Fegan like that, I would have called a press conference publicly saying ‘I do not support this, this is not something that I stand for.'”

Fegan said that while he had nothing to do with the fliers, he cannot guarantee that no one from his campaign team was involved. With such specific information on the fliers – such as the amount of money Hixson would receive as a stipend from student fees – Fegan said he thinks he has an idea of who may have posted the fliers.