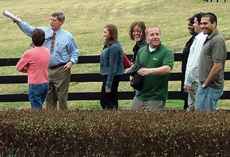 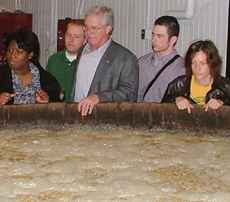 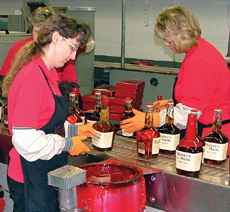 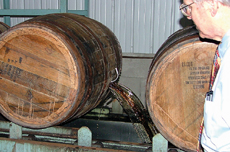 Kentucky pride is based on many traditions, such as thoroughbred horse racing, college basketball, and bourbon.

Students from Northern Kentucky University’s Collegiate Entrepreneurs’ Organization had a chance to experience the bourbon scene first-hand when they visited the Maker’s Mark distillery on March 5.

Jeff Varrone, a graduate student studying public administration and president of the club, said the reason the group went was not just to check out how bourbon was made, but also to see how entrepreneurs handle themselves in the working world.

“Every semester the Entrepreneur Institute brings in a reasonable known successful entrepreneur,” Varrone said. “This allows for students to interact with businesses as well as listen to the entrepreneur together.”

Bill Samuels Jr., CEO and president of Maker’s Mark, was the speaker chosen to appear in front of the group in October 2003.

It was for this reason that the group had the opportunity to visit the distillery.

The other reason was because Samuels is one of the Kentucky’s finest entrepreneurs, according to Varrone. He said Samuels was voted Kentucky’s “Entrepreneur of the Year” in 1995.

Entrepreneurs are people who, when the opportunity to take a calculated risk comes into play, will do it, according to Varrone.

Rodney D’Souza, a member of the group, said that “Entrepreneurship is basically going out there and taking risks, and willing to accept that the risk you are taking is going to pay off or not pay off.”

A risk Samuels and his company took was when they decided to cater their bourbon to the “everyday cocktail drinker,” Varrone said.

“Back in the day, bourbon was considered the old man’s drink. That’s the way it’s always been perceived in the cocktail culture.”

Varrone said that people’s perceptive on bourbon has changed now, thanks to Maker’s Mark.

“His work has brought bourbon into the every day drink, and now other distillers are trying to promote the same image,” Varrone said.

“That’s why you see the rise in the bourbon industry.”

The Samuels family has been in the bourbon industry since 1779.

It all started with the great-great-great-great-grandfather of Samuels, who not only was a farmer in Kentucky, but also produced whisky on the side to keep him and a few friends happy.

In 1951 Samuels’ father, Bob, decided to change the recipe of the whisky so that it didn’t have the bite that many bourbons and whiskeys are known for.

He used corn as the main ingredient and tested his theory by mixing it with red winter wheat and malted barley in his kitchen.

In 1952, Samuels’ mother, Martha, came up with the idea for the packaging of the product.

Samuels told the group how the famous wax seal came into existence.

“They were looking at the bottle, and a way to market it, and she thought of dipping it in wax,” D’Souza said.

Samuels told the NKU entrepreneurs that his father didn’t want to dip the product in wax.

In the end his mother won the argument, however, and now every bottle of Maker’s Mark is dipped in the traditional red wax.

“Even though they are making it on an international level, they still do everything hand-dipped” Varrone said.

“It’s a tough process, too, because you don’t want to over-dip or under-dip, so there is this quick hand movement they have to make.

“They probably mess up one out of a hundred and then it runs down a little. That’s why every bottle when you go to the store is unique.”

The group who went on the tour had a chance to dip their own bottles and take them home as a souvenir.

It was a great keepsake of the entire experience of interacting with a CEO and president of the company, according to Varrone.

“Having Bill take us on the tour gave us a chance to get an inside look,” he said.

“When I step back and think about the fact that he took the time to spend with a few students from NKU, that makes it a really neat experience.”

Samuels spent about three hours with the group, showing them the entire distillery and the process it takes to make the famous Kentucky bourbon.

“It impressed me too, that he gave the tour for us,” Varrone said. “He was so willing and open to do this that it blows me away.”

During the tour people actually have a chance to taste, touch and smell the product at every level..

At one point in the tour, the group came upon the bourbon in the early stages.

“The grains working together were in these huge vats,” Varrone said. “He let us taste it right there. It was pretty grainy and it sort of tasted like a very strong beer.”

Tasting and seeing the product wasn’t the only thing that made Varrone happy to be there.

Varrone said by being there and experiencing the product and at the same time being with the man who loves the state of Kentucky and what it’s done for bourbon made him understand how people in this state can be so proud of the product.

“I’m not from Kentucky, so Maker’s didn’t have the history or pride for me when I was out of the state,” Varrone said. “But since I’ve been here it’s definitely made me a fan.”

“He gives back, he has good deals and opportunities for the people who love his bourbon,” Varrone said.

“He loves giving stuff away because he loves seeing people’s interest. He loves the people that love what he does.”

Since returning from the tour, both Varrone and D’Souza are happy about the experience.

They said they couldn’t wait to take another tour at the distillery located in Loretto, Ky, or maybe even set up another similar event with different entrepreneurs in the future.

The group’s next event is a lunch series, which will be held later this semester.

To learn more about the Collegiate Entrepreneurs’ Organization, visit its Web site at www.53ei.org.