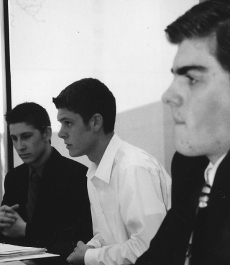 The Student Government Association Judicial Council halted the impeachment process of Vice President for Public Relations Andy Hixson on March 19, after determining that the procedure was improperly handled by the SGA Ethics Committee.

On March 5, the committee sent a letter to the judicial council moving to impeach Hixson.

The committee felt he was in dereliction of his duties.

Hixson appealed the impeachment proceedings on the grounds that the procedure was unconstitutional.

Sen. Nathan Hagler, who served as legal counsel for Hixson, argued to the judicial council that the SGA constitution calls for a two-thirds signed petition from the Senate for impeachment.

“We shouldn’t even be at this point,” Hagler said.

He said the petition is essential for many reasons.

Hagler said a petition would educate members of the Senate and hold the ethics committee accountable for its decisions.

Hagler told the judicial council that if the impeachment went through, there would be no accountability in SGA.

The judicial council unanimously agreed with Hixson and Hagler’s argument.

A crowd of student supporters cheered and applauded when the council came back with its finding.

Hixson was surprised to see the number of students that attended to support him.

“I did not expect this many students,” he said.

“A lot of people see me as being picked on, and no one likes to see someone be picked on.”

“The student body has a definite opinion on this,” said Rachel Whisner, who showed her support for Hixson by creating signs for students to hold up during the hearing.

“For [the ethics committee] to make a decision that doesn’t reflect what the student body wants makes no sense,” Whisner said.

“They’re here to represent us.”

Although Hixson was pleased with the decision and was happy to see a room full of supporters, he did not see the day as a victory.

“I see today as a tragedy. It’s a loss for the students,” Hixson said.

“This should have never happened. The students are the ones who are losing here, with all this petty garbage going on.”

In an official statement issued by Chief Justice Dave Caddell on March 22, he said that proper impeachment requires a two-thirds signed petition by the Senate.

Thereafter, a letter could be sent to judicial council, outlining the Senate’s grounds for impeachment.

The justices would then discuss disciplinary procedures and determine whether options such as removal or censure would be appropriate.

Joe Myers, chair of the ethics committee, saw this appeal as a last-minute escape for Hixson.

“They got out on a technicality,” Myers said.

“They knew they couldn’t win the impeachment case, so they went for the only technical issue they may have had an advantage in.

“Had the true merits of the case come forward, there’s no doubt in my mind how it would have been ruled,” he said.

Myers argued at the hearing that obtaining a two-thirds signed petition by the Senate was optional, not mandatory, for impeachment proceedings.

Caddell said, “The charges, from what I know, were probably pretty tight. [But] if you’re going to try to impeach someone, it needs to be done the right way.”

Caddell stressed this idea in his statement:

“Hixson’s impeachment was improper for purely procedural reasons. We make clear that this holding in no way means that Hixson should not be impeached due to the substance of the charges that were brought forth against him by [Sen. Joseph P. Mayer III] and affirmed by the Ethics Committee…

“Hixson’s impeachment, though likely with merit in substance simply fails the proper procedure as outlined by the SGA Constitution.

“We defer to the judgment of the Ethics Committee whether or not to continue this process by offering a petition to the senators of SGA.”

Myers said he has not yet decided whether he will pursue the impeachment by drafting a petition to present to the Senate.

He believes attaining a petition signed by two-thirds of the Senate may present a challenge due to the partiality caused by friendships.

“In the United States Senate, politics are important. In Student Government, it’s more of a friendship thing,” Myers said.

“We did what we did because J-Council is impartial.”

Myers admitted that Hixson might have had a better case.

However, he said he still thinks the Judicial Council should have heard the case.