The ex factor: painful, but insignificant 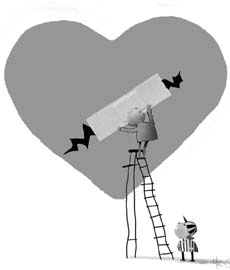 Most people have an ex or two. Some have dozens.

There is the ex we never want to see again, the one who makes us shudder with revulsion and swear to ourselves that we’ll never again abuse mind-altering substances.

There is the one you think of when you catch a scent of her while you’re walking through a crowded mall.

And there is the one who is your buddy.

She calls, she chats, she wants to know what’s going on. She wants to keep you in her life because for some reason she likes you even when you aren’t dating her.

All the exes have their places.

They make great horror stories, learning experiences and funny anecdotes – i.e., the time you thought you ran over one’s hamster until you learned she didn’t have a hamster but that the neighbors kept a Chihuahua. Oops.

But of all the types of exes in the world, there is one no one can stand.

Those, of course, are other people’s exes – more specifically, the ones belonging to our current girlfriends and boyfriends.

There is nothing amusing or entertaining about these people.

They would be best left back in homeroom or on the team bus or on that first job where they belong. It’s for sure they aren’t doing much good around here.

Except for a few I can’t stand, I like most of my ex-girlfriends, although I don’t have much of a relationship with any of them.

We chat on the phone from time to time. I might get a card around Christmas, and one will even call me from time to time to solicit my consultation on work-related issues. I haven’t started billing her yet, but that might not be a bad idea.

While I go for long stretches without ever contemplating my exes or their whereabouts, I am getting the feeling that I mention them about 5,000 times too often for my present girlfriend.

I forgot the golden rule of exes: It may take fish three days to go bad, but it takes only about three minutes before your current girlfriend is sickened by the thought of your ex-girlfriend.

I should know better.

Pam seems to have the whole thing figured out. If it weren’t for my inquisitive nature, I might think I’m the first person she has ever dated.

And for many people, that bit of self-deception is worth a mountain of contentment.

But other people’s exes shouldn’t annoy us so much.

They should be viewed as worn-out videos that our significant others once liked to watch but are now completely bored with.

Meanwhile, we are as shiny and golden and interesting as a brand-new Oscar-winning movie.

Few people seem to have that sort of healthy attitude about other people’s exes.

I’ve never had a girlfriend who didn’t think my most recent ex was a hideous, perverted troll, lucky not to be institutionalized for her bad taste in clothing.

And although I talk a good game, there was never an ex-boyfriend out there whom I did not look upon as though he would be fortunate to lick my boot heels.

(Eric Edwards, who has enough horror stories to satisfy anyone, writes for The Orlando Sentinel. You can e-mail him at eedwards@orlandosentinel.com.)