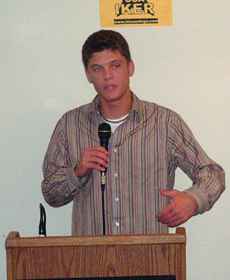 Hixson and Iker presented a platform of issues focused on a promise to bring diversity to SGA and encourage more student involvement in the organization.

“We are dedicated to the value of diversity,” Hixson, a junior, said.

“That’s one thing that the current SGA does not have, and I don’t feel that we can make good decisions for the student body unless we have a diverse student government.”

“The Hixson-Iker team is gonna be able to represent you throughout the whole year, not just at tuition time,” Hixson told a crowd of approximately 75 supporters.

“I love NKU and I love making it a better place,” said junior Iker, a first-semester senator.

Hixson said his administration would set aside money from the SGA budget to give additional financial aid to students.

A committee of SGA members would hear students’ cases and decide how to allocate funds based on need.

“I want there to be an opportunity for students who don’t have the money to stay in school to stay,” he said. “How we do that [is] gonna be up to the Senate.”

“I don’t want to control everything.”

The administration also plans to implement an online forum to evaluate and provide feedback on professors, a system it describes on its Web site as “working with professors, not attacking them.”

A third aspect of the Hixson-Iker platform is to increase understanding and collaboration between SGA and other student organizations by “rebuilding bridges that have been burned by the previous administration.”

Hixson said he plans to “contact the leaders of student organizations, apologize for any sour feelings that there may be, and get to work on rebuilding those relationships.”

He said SGA would co-sponsor programs with other student organizations and offer feedback to them.

“The Hixson-Iker team will take no one over,” he said.

“We aren’t looking to hoard money, we’re looking to give as much away as we can for the betterment of the students.”

Hixson said it is his goal to make SGA “as enjoyable as possible,” and will eliminate the practice of forcing SGA members out of the organization in order to appoint friends.

He said he would change the way senate appointments are made by requiring students to submit a formal application and then allowing the senate to review applicants’ qualifications before they are presented for appointment.

Perry, a former member of the SGA Judicial Council, said she is eager to get involved in the organization after taking a year-long break.

“I’m really excited to get back into it and get involved,” she said. “I think we’ll get a lot done that hasn’t been done in the past year.”

Perry said she joined the Hixson-Iker ticket because “they’re going in the right direction.”

“I took a one-year leave of absence because I did not agree with what was going on in SGA and I could not support it,” she said.

“It’s time to get back into it. I really want to make a difference. I know with this team and what we stand for, we’re going to do it.”

Senior Joe Scully, a marketing major, said he attended the Hixson-Iker rally because “they’re finding a lot of hidden needs that nobody else has really thought about.”

“Everybody says they’ll fight for tuition; that’s all you hear about,” he said.

“But student government should help you out [with] more than just that. There’s other things they can do to make the students happier.”