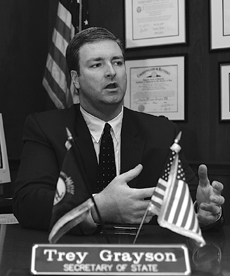 When Secretary of State Trey Grayson spoke to students at Northern Kentucky University on March 19, he came with a message:

“Get involved in college life.”

Gail Wells, dean of the college of arts and sciences, introduced Grayson, who became the first Northern Kentuckian elected to statewide office since 1919.

Grayson graduated from Dixie Heights High School. He then went on to graduate from Harvard College and the University of Kentucky, studying law.

Throughout his life experiences, Grayson said he has come to learn the importance of being involved and engaged.

He said he also learned much from his parents, who were very active in the community when he was a child.

Grayson told the students that there are many ways they can get involved in their NKU community – whether it is through Student Government Association, Greek life, or any other student organization.

He also believes helping out with political campaigns is a perfect way for college students to increase their civic engagement.

According to Grayson, groups like the College Democrats and College Republicans are great “vehicles” for students to become more politically involved.

The position’s minimum age requirement is 30.

This early civic engagement on Grayson’s part is inspiring to many politically inclined and interested students such as SGA Sen. Sheree Davis.

Davis, who organized the event as part of SGA Week, was excited to have Grayson come to NKU and speak to students.

“It was really important for him to come, just so that he can let students know that legislators and people in the government care,” Davis said.

“People in the government are willing to help and willing to listen because that’s their job.”

In addition to stressing the importance of involvement, Grayson answered many other questions from students.

Topics he discussed included what his office duties entail, Northern Kentucky’s presence in the state capitol, and NKU’s continuing problems with lack of funding.

Grayson recognized many of the students from their attendance at a Feb. 5 Frankfort rally protesting higher education budget cuts.

He assured students that their actions were noticed and had an effect on the government.

“People were impressed that that many students came down,” Grayson said.

Grayson also updated students on his proposed Summit for Civic Literacy, which would be held in conjunction with NKU’s Scripps Howard Center for Civic Engagement, the Office of the Secretary of State, the Department of Education and the Department of Justice.

The summit would encourage youth to take a greater interest in the government by attempting to restore more civic education to classrooms.

Its ultimate goal would be to get more young citizens to vote, because the youngest voting bracket has historically had the least percentage turnout at elections.

Many people believe this lack of civic literacy might be a reason for the low turnouts of young people at the polls.

Grayson said the summit is still on track to be organized and presented this fall.

If all goes as planned, the committee would evaluate current voluntary and required civic literacy programs within Kentucky schools, create a strategy to enhance long-term civic education and then recommend a plan of action to increase civic literacy by December 1.

“If it doesn’t happen this fall, it will only [be] because we think we need more time,” Grayson said.

Grayson told the students that people in his office commonly joke about how “every governor’s from central Kentucky.

“And if they’re not, they move after they leave office.”

According to Grayson, Kentucky’s population is currently split, with about half rural and half urban.

However, all of the growth is coming in urban areas.

This means that over time there will be more representation in the state government from urban areas, such as Northern Kentucky.

[Y]ou won’t see this university being as chronically underfunded, because we’ll have a greater voice,” Grayson said.

“You’re going to see more qualified northern Kentuckians running for some of these statewide offices,” he said. “Demographics are woking in our favor.”

Grayson also talked about the importance of voting and making sure college students are registered to vote.

“If more Northern students are registered to vote, Northern’s voice will be louder,” Grayson said.

Davis agrees with Grayson’s views, and was grateful to have him share them with the students.

“He agrees that our university needs help.”