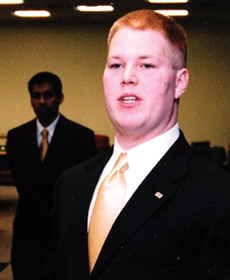 Approximately 100 students listened as Fegan introduced his “contract with NKU students,” which outlines his ticket’s platform of issues. Each student was provided a copy of the contract, and the crowd watched Fegan and his four running mates signed the document.

According to Fegan, the idea to create a contract with NKU students was based on a similar concept adopted by the U.S. Congress in the early ’90s.

The contract details 10 issues Fegan and his ticket plan to work on, should they be elected to office. According to Fegan, the three most important issues on the contract are “The Student Tuition Fairness Act,” “The Student Empowerment Act,” and “The Food Service Reform Act.”

Fegan, current chair of the tuition committee, feels his experience in the area will help him fight against unfair tuition increases.

Fegan also wants to empower students by fighting for student allocation of student fees. He said under the current system, university administrators are in control of allocating money to student organizations, and when it isn’t spent, it goes back into a general fund.

Food service is also an area Fegan believes is a big issue for students. He would like to make meal plans optional for residential students, offer value meal to commuters, and create a student food service task force to identify other problems.

Aside from the issues, Fegan said his ticket is running on experience, diversity and improvement.

“Our competitive ticket really has three people on there that have never been on Student Government,” Fegan said. “[Additionally,] we think we’re as diverse, if not more diverse, than them.”

Fegan believes his ticket is very diverse, as it is composed of Greek and non-Greek students, residential and commuter students, and an international student.

“One thing [Hixson’s] ticket is lacking [is] a non-Greek Caucasian, which makes up about 92 percent of this campus,” Fegan said. “That’s what James Pollitt represents for us.”

Fegan also said that his ticket is committed to improvement. It is advocating Division I Athletics, pushing for continued progress of the student union center and the special events center, and working towards increasing the value of an NKU degree.

Freshman Kristen Worley attended the Fegan-Pollitt rally with many of her Kappa Delta sorority sisters.

“I think they’re a strong council, and they’ll lead our school into the best interests,” Worley said. “They have the same opinion as the majority of the students here.”

Current SGA President Chris Pace was also in attendance, and was impressed by the large turnout.

“They have an impressive crowd, and that’s really what these campaign parties are all about. I think they’ve gotten off to a good start,” he said.

Pace is also very impressed with the platform Fegan and Pollitt are running on.

“I think when you have people who are willing to take advantage of an opportunity to give the students more of a say in things, it’s always a good thing,” he said.