Teenage travelers get lost in Europe 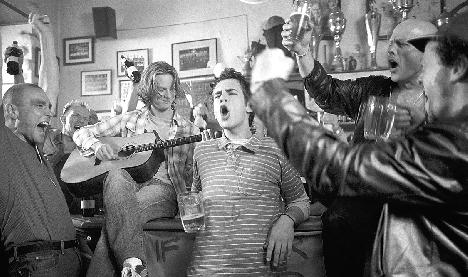 In case your life isn’t filled with enough naked people and dirty jokes, “Eurotrip” wants to to fullfill your needs.

Directed by Jeff Schafer and written by Alec Berg and David Mandel (three ex-“Seinfeld” writers), “Eurotrip” exposes the adventures of four friends, fresh out of high school, as they trek around Europe.

Scott, thinking Mieke is pronounced “Mike,” sends her a drunken E-mail telling her to get lost after she tells Scott she wants to come to America to visit.

After discovering it’s a female name pronounced “Me-kah,” Scott decides to locate Mieke to mend the relationship. Cooper tags along to indulge in “freaky European sex.”

Once in Europe, drunken, sex-filled, slapstick escapades ensue. The buddies team up with their twin pals Jenny (Michelle Trachtenberg from “Buffy the Vampire Slayer”) and Jamie (Travis Wester) to help guide them around the continent.

The male audience members may drool over the frequent female nudity, but the women might not get much enjoyment from the full frontal nudity of older men frolicking on a nude beach.

The movie was advertised as being “From the producers of ‘Road Trip’ and ‘Old School.’

Whenever I hear ads proclaiming who the producers are, I become a little skeptical. It makes me wonder why the best thing they could say about the movie was who produced it.

The same people that produced “Road Trip” and “Old School” created this movie, yet it hardly encompasses the genius hilarity of either film.

With jokes about incest, bestiality, and S’M, I doubt this is a movie to watch with parents.

With mediocre writing and a cheesy ending, “Euro Trip” is tasteless toilet humor good for only a couple of laughs.