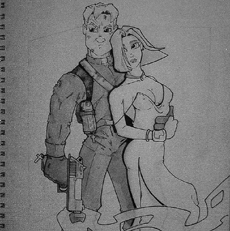 Imagine a 6-year-old boy, sitting at the kitchen table, with Grandpa and playing a guessing game. Not the “I see something you don’t see, and the color is…,” guessing game, but the drawing version of that guessing game – where Grandpa draws a part of an object and the grandchild finishes it.

That 6-year-old boy was Walter Deller, who is now a 28-year old Northern Kentucky University junior pursuing a major in drawing and illustrating. Instead of drawing with Grandpa, Dellar said, he is

creating illustrations for the art director at City Beat magazine.

The illustrations Deller has produced for City Beat have ranged in different entertainment issues, such as Black-on-White versus White-on-Black humor and rap battles, like the one featured in the movie “8-Mile”.

Deller said that each illustration takes over four hours to complete. If his creativity is flowing, he doesn’t even stop for a bathroom break, Dellar said.

For each illustration Deller creates for City Beat, the first image is from a line in the story that catches his attention, he said. He’ll then draw several sketches called thumbnails. and then he mix and matches different characteristics from each thumbnail to create his final work. All this work is done inside his sketchbook.

After Deller perfects his illustration, he draws the image on an 11 x 17inch bristol board to send back to City Beat, Dellar said.

Deller’s artwork is unscripted and carries a graffiti-like style.

“I like to come up with my own ideas by exploring my creative side. I’m not scared to put anything on paper,” said Deller.

Deller said that he has always been fascinated with the idea of drawing. By drawing, he said, he was able “making something pop out of a piece of paper,” said Deller.

Along with his Grandpa’s influence, Deller said he also admires the work of well-known artists such as Norman Rockwell and C.F. Payne, and the Kabuki comic book artist, David Mack.

But it was after reading Bill Watterson’s Calvin and Hobbes comic strip that Deller said he realized that he could draw and illustrate for a living.

Deller has the desire and drive to be a successful artist, he said. His dream job would be to write illustrate his own comic book.

“By writing comic books, you can add something of yourself to the character,” Deller said

Deller said he is pursuing a minor in literature to gain the knowledge he will need to write his comic book. Among the staff at NKU, Deller most admires Kevin Booher, an art teacher.

“I admire him [Booher] because he teaches his students from a real world perspective and teaches us the business aspect of being an artist,” said Deller.

Deller’s name can be found in the credit section of City Beat magazine, and look for his illustrations in the Film or Music sections.

Deller’s first art show will open after Covington’s Madri Gras celebrations are completed at Cosmos, a bar in Covington, Kentucky. In the March 3rd issue of City Beat,