Senator steps up to bat for NKU 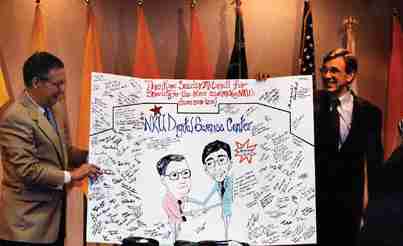 Sen. Mitch McConnell spoke to a large crowd of students and faculty members at Northern Kentucky University Feb. 20, as the second speaker of TeamNKU’s Government and Community Lecture Series.

As the majority whip in the Kentucky legislature, McConnell was invited to speak at NKU and receive thanks for his efforts in acquiring $1.7 million for a digital science classroom in the new Natural Science Center.

“About a year ago it was decided to approach Sen. McConnell regarding putting an earmark into the Federal budget for funding for the facility,” said Dr. Chuck Hawkins, physics and geology chair. “This was firmed up late in March as a joint proposal from NKU and [the University of Louisville] that included our digital science center and their remote telescope in Australia, plus facilities to view and control the latter remotely from U of L and from NKU.”

“As the senator said, he has used his influence in Congress to support higher education in Kentucky, and this project appealed to him in that light, so he gave it his support,” Hawkins said. “I know of several projects in astronomy and related areas at universities around that state that have come about due to Sen. McConnell’s efforts.”

Both NKU President James Votruba and Provost Gail Wells spoke about the benefits the digital classroom will bring thanks to McConnell’s support.

Votruba said it was a day to celebrate the digital science center, and introduced McConnell as an important asset to NKU.

“We are pleased to have this opportunity to say thanks as a university,” Votruba said.

Hawkins and students presented McConnell with a plaque for his “ongoing support” in securing funding for the digital science center.

“I think this will be a real showcase for NKU, and the bottom line is that the work of the senator to obtain the funding has been crucial to the success of the project,” Hawkins said.

“He has worked consistently to bring to Kentucky projects that we have been left out of in the past, particularly in high tech and aerospace.”

The card featured caricatures of McConnell and Votruba and was signed by students and faculty members.

“This is overly generous for whatever small role I may have played to secure NKU its dreams,” McConnell said.

The presentation’s focus was the digital classroom, which Votruba said will be the “finest science center of it’s kind anywhere in the nation.”

The digital classroom will include a planetarium with a 30-foot dome, along with new software and technology.

Votruba said new programs will “help science come alive for so many students” by allowing them to go inside a beating heart or the circulatory system, for example.

Votruba and Wells both said that the digital classroom will benefit the community as well as NKU.

Students in grades P-12 will have access to the center, and summer workshops will be held there.

Aside from the digital science center, McConnell addressed other pressing political topics facing not only the university, but the state, nation and world.

He said there will be two mega issues concerning students in the fall: “the economy – where are we headed, and the war on terror – where we’ve been and where we’re going.”

McConnell said the United States was in a “period of tepid growth” until last summer when the economy was “jump-started,” and he is pleased with the decrease in unemployment.

As for the war on terror, McConnell said he is satisfied with the progress and surprised by those who think the United States is faced by greater dangers since September 11.

“It is absurd to think America is not safer now than it was September 10,” McConnell said, adding it is “noteworthy” that the United States has not been attacked at home since September 11.

“We’re working to make sure it doesn’t happen again.”

McConnell also applauded the “extraordinary young men and women in our military” helping Iraq move toward becoming a functioning democracy.

The senator described his role as majority whip as being the second person in the legislative structure who “whips everyone into line.”

As the second ranking Republican in the United States Senate, McConnell “coordinates the party vote” on important legislation.

One student asked who McConnell’s favorite president was, to which he answered Ronald Reagan.

He said Reagan was a “conviction politician” with a core set of political beliefs, not a convenience politician who only paid attention to polls and criticism and was too soon to compromise.

“Great leaders don’t spend a whole lot of time wetting their fingers and trying to find out which way the wind is blowing,” McConnell said.

With strong convictions of his own, McConnell proved to be a beneficial asset to the Government and Community Lecture Series.

The Judge Executives from Boone, Campbell and Grant counties will visit in March as a part of the series.