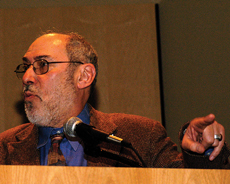 No, not killing everyone with fair skin, but eliminating the social construal of whiteness.

Dr. Noel Ignatiev’s “The New Abolitionist Movement” speech in the University Center’s Budig Theatre on Feb. 24 addressed how to eliminate the discriminatory nature of race as a social structure.

“Few things in our lives exercise greater influence – on our life chances and how we can expect to be treated – as our racial identification,” Ignatiev said. “As a biological category race is a fiction, but as a social category it’s very real.”

“That is what I propose to get rid of.”

Point being that by eliminating the classification of races, discrimination can be erased from the social environment. He said his main goal for people to “look at the United States from a different perspective.”

In order to rid society of the restriction of race, Ignatiev said two things must be known: how the idea of race was created, and how it is maintained and influences our lives today.

Racial segregation and discrimination began after slavery was abolished following the Civil War. With the advent of Jim Crow laws, people were clearly designated as black, and others as white.

The line was clear.

Those laws have disappeared, but “race continues to exercise an influence over modern life,” Ignatiev said. But racial influences are not as easily identifiable in the modern era as they were in the past.

He then addressed how these racial influences manifest themselves today.

Most people think that the past, filled with an abundance of blatant discrimination, is dead, according to Ignatiev.

He added, “What many people, particularly white people, do not like to acknowledge is that the effects of that old discrimination are not all gone.”

He said his purpose is not to make people feel guilty about the past, because no one controls what their ancestors did. He wants to work at eliminating the institution of racism and discriminatory practices.

It is not simply a matter of putting the past behind us and “getting over it,” he said. The things that are still going on today as a result of the past are what we must address.

He discussed ways racism and discrimination are reproduced or transmitted in society.

For one, he said whites were afforded advantages in the past – property, money, or education. These advantages are transmitted to the next generation through “mechanisms that appear colorblind.”

For example, job opportunities are often accessed through social connections or inheritance. “For historic reasons, those connections are racially coded,” said Ignatiev.

There is no racial connotation in helped your son get a job, but it becomes racial when it is a group of white parents helping their children in a way that black parents cannot.

It’s not out of malice that some people are left out of the loop, but this system is handed down through generations.

He calls it the paradox of modern America. “Most people in America do not consider themselves to be racist, do not wish to be racist, and yet this is a racially divided society.”

Race continues to operate as an oppressive category, even though people often have the best intentions.

He also mentioned that though the racial difference is minute when examining wages for specific jobs, the difference between household and family wealth is enormous. He stated statistics that show whites having 5 to ten times more family wealth than black families holding the same job or educational status. This came from a time when the Federal Housing Society helped middleclass families purchase homes.

However, the society operated under racially discriminatory terms by only giving aid to people in certain neighborhoods. They used red circles to mark the areas in which they would not grant monetary aid. These “red-lined” areas were typically black areas, according to Ignatiev.

Therefore, they excluded blacks from federal housing moneys; a situation that has given generations of whites advantages over blacks, because a house is a lucrative economic advantage.

He ended with, “There is a whole world of possibilities out there, outside of…whiteness.”

A student asked how individuals can help abolish whiteness, and Ignatiev answered by saying, “Challenge the mechanisms that are used to exclude people.”