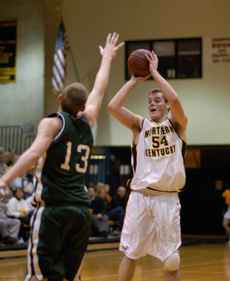 During Valentine’s Day week, I decided to interview two basketball players who are dating. In the second week of this two-week Valentine’s Day Hot Seat, I interviewed Pat Cary. You can see the answers of Pat’s girlfriend, Betsey Clark, in last week’s Northerner. John Rasp: Playing a game of HORSE, who wins between the both of you? Pat Cary: I win. I’m not going to lose to her in anything at all.

JR: Now that you guys are dating, do you cheer more for the men’s/women’s team that they are playing on? PC: No. Usually I just sit in the stands and mind my own business.

JR: If you guys were playing on the same team in a two-on-two game, which men’s/women’s players would give the both of you the most trouble? PC: Betsey would have the hardest time with Connie, because she is really good. For me, probably Walt (Mike Kelsey) because he can shoot and get by me pretty easily because I’m so slow.

JR: What would Betsey say was her best game this year? BC: I have no clue.

JR: Who get’s madder after a loss, you or Betsey? BC: Me, because I’m always mad after we lose.

JR: What were the big plans for Valentine’s Day? BC: There weren’t any. After the game (went triple-overtime) it kind of all got screwed up. We didn’t get out of there to almost 10.

JR: What player/players give you the hardest time about going out? BC: (Kevin) Schappell. He jokes around a lot about it.