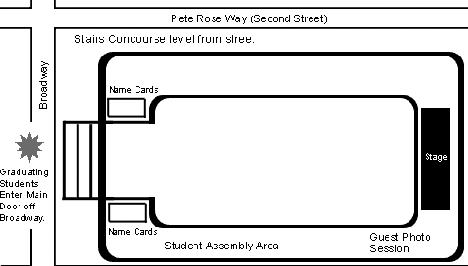 The possibility of a new special events center on the Northern Kentucky University campus could bring many benefits to the university and the surrounding community.

If the state legislature approves Gov. Ernie Fletcher’s $42 million bond proposal for the center, the university will be one step closer to building the events center.

“I see the arena as being a beacon for us, but also for the community,” said Athletic Director Jane Meier. “It will attract many community people to our campus, and I think that’s a plus because there are a lot of good things going on on our campus, not just athletically but also academically.”

This is not the first time that the university has entertained the possibility of building a new special events center. Previous state revenue budgets made it nearly impossible to obtain the necessary funds to complete such a costly project.

“The idea has gained momentum because of a couple of reasons,” Meier said. “The political scene has changed; we had a number of candidates running for governor who supported the project publicly. They were both democrat and republican. A republican governor was elected and he publicly said he was aware of the project, and that it was the number one priority in Northern Kentucky.

“Also, our business community is very much involved in buying into the project, and [they] see the value of it. That’s why the arena was originally supposed to have 6,500 seats and now we are talking more like 8,000 to 10,000 seats.”

The present gymnasium, Regents Hall, has approximately 1,700 seats available. In a region that includes 350,000 people, the facility simply cannot fulfill the needs of the university and the community.

“There are a number of high school gyms in the area that are better than ours,” Meier said.

“We’re a major regional institution with over 14,000 students. I believe it’s important to have an arena on campus that’s not only a center for athletics, but also a center for the academic programs, and even more importantly, for the community.”

The special events center will be versatile and have a myriad of uses.

“What this facility will provide is a venue for events ranging from graduation to athletic events to concerts to community sporting and entertainment events,” said Mary Paula Schuh, director of campus planning. “It provides a sense of completion to the campus that currently doesn’t exist.”

However beneficial, there is still a concern with the ability to fill a new center. NKU basketball games are some of the most popular events on campus, yet, there are many games that do not sell out.

“One of the reasons why we don’t fill up our arena is because it is so uncomfortable,” Meier said. “It’s hard to get to the concession stand, it’s very difficult to get to the restrooms, or to even move around the floor.”

Perhaps a new center will offer a solution to these problems.

A trend associated with building an events center is the possibility of a ticket price increase. Right now, NKU students get in free with a student ID. The general public pays $10 for a reserved seat and $7 for general admission. Meier does not deny that there will have to be increased ticket prices.

She added, “You’d have a nicer seat, you might have access to a hospitality room, or another area where we could have some other social things going on.”

Another concern many people have is that the events center may lead to another tuition increase.

Former Student Government Association President Katie Herschede said, “As a university we get most of our money from the education budget. The special events center comes out of the tourism and economic development budget, and will not affect the tuition level.”

This means that the school either gets the money for the events center or it does not get the money at all; it cannot be used to pay professors’ salaries or maintain tuition levels.

Meier said, “This arena will put us on the same level with the rest of the regional institutions that have an arena on campus.”