Choice of drink is gender issue 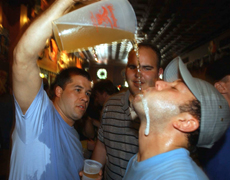 Q. Is it true that the kind of drink you’re having says something about your personality?

A. As I sit here sipping on gasoline and chasing it with lighter fluid, I can honestly say that what you drink has no bearing on who you are.

However, this is definitely a gender issue. Ladies, you can get away with drinking just about anything.

Yes, ladies can drink ANYTHING and get away with it without social demoralization.

The dudes of this world live on a different social crust.

Hopefully none of this is new information to you, but if it is, take notes.

I’m not talking about some general education class notes, I mean REAL actual notes that find a permanent home in your brain.

Now that we understand the gender barrier, as far as social drink selection goes, let’s explore what you drink and why you drink it.

Bartending in a college town, I have the fortunate opportunity to influence young livers.

I have served countless numbers of fresh 21 year-olds. I enjoy this position because these people are like Michael Jackson visiting Dubois (pause and let that one sink in).

Let’s actually assume, for legal reasons, that you begin drinking when you turn 21.

What you start drinking is never what you eventually drink, otherwise everyone would be drinking 40s.

It’s like having a major at college: it changes every four months, and despite what you eventually graduate in, you wind up working at a bank, or worse yet, tending bar.

This is the beauty of drinking. The drink will not think less of you, despite your social surroundings-so explore!

Try a scotch on the rocks sometime. Try a Manhattan or martini (and not some fruity “martini”). Try a dark beer. Try something other than what’s on special!

For goodness sake’s people, I’m begging you. Try something other than a lager or a Long Island iced tea!

Trust me when I say the only person who cares what you are drinking is the bartender (unless you’re a guy drinking a “girly” drink).

The only reason I care is because it’s my job to remember what you drink.

I’d like to think I can tell why you drink what you drink, but even I’m wrong most of the time.

Everything is relative to context.

Therefore, what you drink ultimately says nothing about you. It’s all about the situation (are you playing darts with friends, sitting at a table with a date, sitting at a bar killing time, etc.), the time of day, the type of bar you’re at and the price of the drinks (let’s be honest).

Your tastes will change over the years, but unlike your choice in a spouse, you won’t lose your house if you decide to switch from rum to vodka.

So explore, but if you ask me for a drink that requires the use of a blender, you damned well better tip heavily!