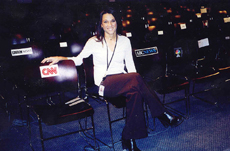 Imagine getting the opportunity to work inside the Pentagon and earn up to 10 credit hours.

Jamie Reese, a NKU senior majoring in journalism, had just that opportunity in the fall of 2003, when she spent a semester interning in Washington, D.C.

Reese worked as a writer and editorial assistant for the Armed Forces Press Service, and wrote articles for the DefenseLink.mil and DefendAmerica.mil Web sites.

She attended weekly night courses, a series of presidential lectures, provided the homeless volunteer work, and ate at congressional breakfasts – all while assembling a portfolio to present to NKU’s internship adviser and her future employers.

In Washington, Reese said she had weekly assignments to complete for each different job she held.

When working as a writer Reese conducted interviews to produce articles on the websites’ military Personal Profiles.

She also sat in on Pentagon briefings and presidential lectures to complete her assignments.

Under the direction of Mitch Samel, Reese also helped in “revamping” the production of the Pentagon Channel.

Reese’s internship allowed her real world experience, but it came with a cost.

“I was always bringing work back to the apartment with me. I wouldn’t get home from the Pentagon’s social events until 11 p.m. and I’d have an article due the next morning about that event,” said Reese.

But Reese’s hard work paid off. Five Pentagon and military stories she wrote were published during her internship. One article, “Military Wives,” graced over 15 Web sites.

“It was exciting to have family back home calling me to say they saw one of my articles again and again on different Web sites,” said Reese.

Reese said her most memorable event was an interview she conducted with a soldier at Walter Reed Army Medical Center.

The 21-year-old interviewee had his leg amputated after injuring it in a firefight in Iraq last October.

During her internship in Washington D.C., Reese lived in an apartment with three other intern students. Her apartment was located four miles from the Pentagon in Alexander, Virginia.

Reese was compensated for her work because she held a government job, but the pay was at a low level, she said.

School loans paid for most of Reese’s five month stay in Washington.

After applying through the Washington Center and undergoing an hour-long phone interview, Reese was given her choice of an internship at the Pentagon or at USA Today.

Reese said in her portfolio that she decided on the Pentagon internship because “it combined my interest in journalism and public relations, as well as allowing me to work within the military environment, which I’ve always had a passion for.”

Reese advises students to consider enrolling in the internship program because she said it gets your name out there, earns you academic credit and could lead to a job offer.

After completing her journalism internship, Reese was offered a job in Washington D.C., contingent upon graduation from NKU.

Reese will have her choice of working with the Pentagon’s public affairs writers or the Pentagon Channel’s production crew.

Reese said she will keep the Washington job offers in mind as she shoots for her dream job as an anchor at ESPN.

Reese’s articles and those concerning the military can be found at DefendAmerica.gov.