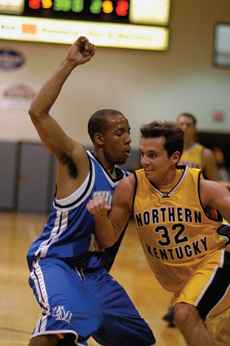 EDWARDSVILLE, Ill. – Ron Jones scored 15 of his 21 points in the second half Saturday afternoon to lead Southern Illinois University at Edwardsville to an 81-75 victory over Northern Kentucky University at the Vadalabene Center.

Calvin Sykes added 18 points, seven rebounds and dished out six assists for the Cougars, who improved to 9-7 overall, 5-5 in the Great Lakes Valley Conference.

NKU had not lost to SIUE since the 1991-92 season, when the Cougars posted a 97-90 win against the Norse in Edwardsville, Ill.

Since joining the GLVC, SIUE had gone 0-14 against NKU prior to Saturday’s victory.

Jesse Rupe scored 11 points before before the break for the Norse, who trailed by 17 points in the first half.

“We got behind, but we battled back in the second half,” Shields said.

The Norse responded with a 26-12 run, capped by Jordan Stowers’ three-point basket with 22 seconds remaining to cut the lead to 75-73.

The Norse spurt was keyed by Steve Purdon, who scored all of his 16 points in the second half.

“Steve Purdon really stepped up and played courageously in the second half,” Shields said.

Jones sealed the game for SIUE by hitting six straight free throws in the final 20 seconds. He finished the game with 21 points and made all 10 of his free throw attempts.

Mike Kelsey scored 10 points for the Norse, and he now has 997 career points. Pat Cary added eight points and six rebounds for NKU.

The Norse return to Regents Hall for a game against the University of Wisconsin-Parkside at 7:45 p.m. on Thursday.