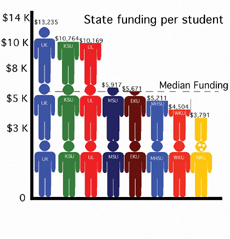 A recent string of state budget cuts from Frankfort has Northern Kentucky University scheduled to take a loss of $4 million from its general fund, forcing administrators to make internal reductions to avoid a mid-semester tuition hike.

“For the first time in the last couple of years, higher education is being assessed budget reductions in line with the other state agencies,” said Gerald Hunter, vice president for enrollment and financial planning at NKU.

December’s cut, however, was not the end of Fletcher’s budget reductions. Based on a meeting held last week between state university presidents and the new state budget director, NKU is in position to lose an additional $2 million dollars. This second cut comes from Fletcher’s new proposal to take another $45 million from higher education, bringing total postsecondary education cuts to nearly $70 million under Fletcher, who was inaugurated on Dec. 8.

For the fiscal year of 2003-2004, the state had originally planned on giving over $47 million to NKU, toward the university’s annual budget of $125 million. These recent cuts would cause an 8.5 percent cut to that amount of state funding.

Hunter pointed out that NKU is not alone in suffering from reductions to an already-under-funded budget. He said that Western Kentucky University is essentially in the same boat, due primarily to the fact that both universities receive special “benchmark funding” to compensate for low state funding per each full-time student. Although the two universities benefit from benchmark funds in economically good times, they take bigger cuts in economically bad times.

“Western and NKU are the fastest-growing institutions in the state,” Hunter said, “and coincidentally, they are the least funded. It’s easier to recognize [our growth] when times are good than when times are tough.”

These $4 million combined cuts from Frankfort will top off NKU’s three-year reduction at about $5.4 million, according to President James Votruba.

“Given our historic under-funding, our nearly 20 percent growth over the past four years, and the strong regional demand for greater student access and more involvement in addressing challenges confronting our region, these reductions will impact the campus in several ways,” Votruba said.

Hunter said there are many ways in which NKU could be affected, including the possibility of increasing tuition by as much as 20 percent, curtailing enrollment growth, and substantially decreasing the amount of need-based student financial aid.

A mid-semester tuition increase has also been discussed. Before the second $2 million cut, Hunter was under the impression that this would be completely avoided. However, after recent developments, Votruba is now uncertain about what will happen.

“While we are doing everything in our power to avoid a mid-year tuition increase, at this point I cannot promise that an increase can be avoided.” Votruba said.

Votruba stressed that university officials are making every attempt to avoid a mid-semester tuition hike.

“We are currently looking at every line of our budget to find funds that can be used to cover the reductions,” he said. “We are also looking at ways that we can do the work of the university more efficiently without compromising quality.

“Several students have said to me that it is not fair that our students should be taxed in the form of tuition in order to send money to Frankfort to offset the deficit. This is particularly unfair when one considers that our students already pay 60 percent of the cost of their education, when the average at the other universities is around 37 percent.”

Chris Pace, SGA president, is among the concerned students.

“If you look over the past couple of years, we’ve had sizeable tuition increases,” he said, “so I would hope in some ways our administration has prepared itself for this reality, and we would not have to suffer further increases on the backs of the students alone.”

NKU receives the lowest amount of funding per full-time student of any state university, at $3,791, compared to the median amount of $5,671. According to Hunter, NKU’s funding level has always been low because NKU is a much younger institution than others in the state. Funding has also been historically low because the university evolved from a community college, which is typically funded much less than full-fledged universities.

“To do everything necessary to correct NKU’s under-funding and insure that NKU students receive state funding that is at least equal to the median of the other comprehensive universities in the state…would cost approximately $15 million,” Votruba said.

“Any cuts in postsecondary education are cuts on the future of Kentucky,” Pace said.

According to Hunter, the cuts may indeed affect the future of NKU students, faculty and staff. Some faculty and staff positions may be eliminated, and hiring new faculty may also be temporarily halted. The frequency of course offerings may even be reduced, resulting in a delay in graduation for many students. NKU’s learning environment may also suffer, as maintenance of campus facilities will be greatly reduced.

NKU may also very well see less community outreach initiative projects, which the university has lately been highly recognized for throughout the region.

“We need to continue to seek adequate funding for the institution,” Hunter said. He believes this is the heart of the issue, and says that NKU has great leaders who are doing just that.

In anticipation of a budget cut, the university placed $1 million in reserves this year, but Hunter said that NKU now needs to come up with another $3 million. He said this would mostly be obtained from internal budget cuts.

“Our challenge will be to sustain the momentum of the past few years and continue to support both quality and access under what may be very severe financial constraints,” Votruba said.

“While the budget picture currently looks daunting, I would caution everyone that we are very early in this year’s legislative process. The conditions in Frankfort are fluid with lots of ideas being floated for resolving the budget deficit,” he said.

“While we confront a major fiscal challenge, I remain confident in NKU’s capacity to weather the storm and find ways to advance our mission on behalf of our students and our community,” Votruba said.