State has no role in marriage 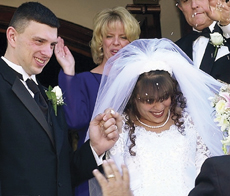 (U-WIRE) AUSTIN, Texas – The culture wars raged on last week as the Massachusetts Supreme Court ruled that state marriage laws may not be construed to exclude homosexuals.

This newfound civil right vindicated liberal pundits, who saw current marriage laws as intolerant. Conservative commentators complained that courts should not arbitrarily redefine marriage and overturn a law supported by the people.

Once again, both sides just don’t get it: What business is it of the government to regulate marriage in the first place?

Both liberals and conservatives argue that since marriage is of such fundamental import, the state has a compelling interest in defining and controlling it.

They often allege, correctly, that marriage is one of humanity’s oldest and most important institutions. But they make an invalid deduction the government should have power over it.

The question, then, does not revolve around whether marriage is important. Rather, who should define this institution: The government or individuals? In the end, whatever the merits of marriage as a social good, it does not need the government’s interference to survive. It never did. Whereas the modern state dates back only a few hundred years, marriage has long existed independent of government.

Most marriages derive their personal significance from religious or cultural sanctions, not from the approval of a low-level government functionary.

As it stands, every state government has the power to define marriage, and by extension, the derived benefits, such as tax write-offs or homeownership benefits.

Conservatives, who are traditionally skeptical of programs such as affirmative action, should take note of marriage laws that selectively endow entitlements to one segment of the population over another.

The fundamental problem with marriage licenses isn’t the benefits, but rather the nature of the license itself. Marriage licenses are contracts. The state government, not the couple involved, defines the legal terms of the contract. If a couple wants to be married and receive legal protection and recognition, they have no choice but to abide by the terms of the state.This makes marriage, in essence, a state-sanctioned monopoly.

Deregulating marriage means ending government monopoly, state by state. It signifies that couples have full legal authority to draw out their marriage contracts. Courts could then enforce those contracts just like any other legally binding document. If the government were removed from marriage, the benefits would be numerous.

In short, the only thing that would regulate a particular union would be social norms, which is exactly the way it should be.

Third, removing the government from marriage would make marriage and divorce laws much simpler.

The solution, then, is to remove government from the equation altogether. The state needs to stop playing priest for every wedding.

Individuals should be free to define the terms of their own relationship.