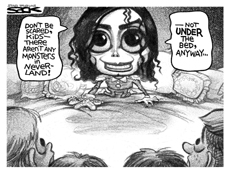 These allegations follow a child abuse investigation in 1993 that brought Jackson’s career to a screeching halt. In a shameless display of injustice, criminal charges never resulted from that incident, but Jackson reportedly settled the claims in a multimillion-dollar civil settlement.

Another innocent child served a tragic dose of American justice.

What kind of parent lets his/her child sleep over at Neverland Ranch?

Only a year ago Jackson was in the press for dangling his baby over a balcony on the fourth floor of a German hotel.

In February 2003, ABC broadcast a documentary on national television that was watched by millions of fans who must have some unexplainable fanaticism for the pop star.

On the show, Jackson admitted that he’s slept in the same bed with many children not related to him.

When questioned about it, he said it wasn’t sexual but, instead, was “very charming” and “very sweet.”

While his admission claims to show that his actions are harmless, parents ought to evaluate the history of allegations and compare that to his behavior.

According to the American legal system, Jackson is innocent until proven guilty, but it doesn’t take a Parent of the Year to realize that he might not be the best guy to chaperone your young son or daughter at a sleepover.

Waiting until his guilt is proven in court is like holding your bleeding hand in a pool with a hungry shark to be sure that it really will bite. But instead of your hand, you’re feeding your child to the predator.

Perhaps his behavior is perfectly innocent, but it just doesn’t seem rational. Amid rumors that Jackson has had multiple cosmetic surgeries, he was in court on Nov. 13 wearing a surgical mask and a bandage on his nose.

His appearance in Santa Maria Superior Court was for breach of contract because he cancelled two New Year’s Eve performances that were scheduled for 1999.

Expert plastic surgeons who compare pictures of Jackson when he was younger with current photos suggest that over the years he has bleached his skin and made his nose pointier to have a face that looks more Caucasian, as well as other procedures on his chin, lips and eyes, although he denies having any cosmetic surgeries.

Jackson obviously has personal issues with his looks, which suggests that his eccentricities border on serious mental disorder.

That alone doesn’t make him a predator, but he has no fear telling the world that he likes being in bed with children, even though he recognizes that people immediately associate sleeping in the same bed with sex.

Michael Jackson is not your average father, who enjoys spending time with his children and their friends.

He suggests that sleeping in the same bed as a young child that isn’t a relative is perfectly innocent.

However, his beliefs won’t clear his name.

Let’s see if he has enough left in his checkbook to make his problems disappear.