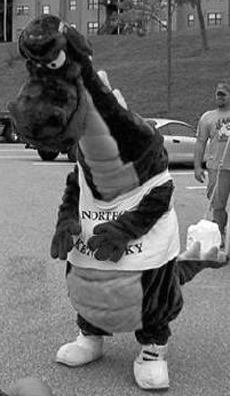 This week Elias sits down with the NKU mascot, Hey-U.

Elias Hajjar: If you could change anything you wanted about your costume, what would it be? Hey-U: I might give him a bigger head. I’d also give him a jersey that looks like what the basketball teams’ looks like.

EH: What’s the hardest thing you’ve had to deal with when wearing the costume? Hey-U: One time I was walking down the aisle where the other team’s fans were sitting, and this lady put her foot out and tried to trip me, but I didn’t fall.

EH: How do you handle the heat inside the costume? Hey-U: I usually stay in it for the whole first half and some of halftime. I get out of it for the rest of halftime and the first part of the second half. I just stay really hydrated and everything. It gets really hot in there. When I come out of it my shirt is soaking wet, and when people undo it they feel the heat bursting out.

EH: How smelly does it get in there? Hey-U: It doesn’t really smell too bad. It’s pretty well ventilated. I get air through the little area I can see through.

EH: Are kids scared of you because you’re a big dragon? Hey-U: Most kids run up and give me a big hug, but the babies are usually scared. I’ll try to reach out my hand and sometimes they’ll scream and cry. EH: Do you wish that you could breathe fire? Be honest now. Hey-U: Yeah, that would be pretty cool. I’d be afraid I would hurt someone, though. EH: Do you get any perks for being Hey-U? Hey-U: I like being able to make people laugh. That’s a good thing that comes along with it, plus I can dance and look stupid, because no one knows who is in the costume. I can act as stupid as I want and no one will care.

Fact or Fiction: EH: There isn’t a better mascot than Hey-U in the country? Hey-U: Fact. Hey-U knows how to dance, he knows the dance moves and the team Hey-U represents is the best in the country.

EH: You sometimes feel like a dork while dressed up as Hey-U? Hey-U: Sometimes when I’m walking by kids my age and they kind of look at me weird. I feel really stupid, but that doesn’t really bother me, because then they’ll give me high fives and go along with it and have fun.