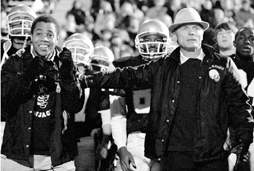 A movie like “Radio” raises a lot of questions.

From the very beginning, as the opening words come on the screen “inspired by a true story” one wonders how much of it is actually true and how much is artistic license?

How did the makers of the film get such high powered stars such as Ed Harris to star in the movie? And lastly how did a movie like this ever even get made?

Not that it is a particularly bad movie it’s just that movies like this are increasingly being done, and being done better, on television.

By movies like this I mean Feel Good Movies intended to tug at the heart strings, and warm the cockles, and to have you leaving the theater feeling all is right and well with the world.

That said “Radio” is a perfectly agreeable family film, sweet natured and inoffensive, and one that makes you feel as warm and fuzzy as your grandma’s slippers.

The performances in the movie are adequate. Veteran actors Ed Harris (Apollo 13), Debra Winger (Terms of Endearment) and Alfre Woodard (K-Pax) give slightly better than capable performances that they really could do in their sleep.

The only problem spot in this category is Cuba Gooding Jr. who tries a little too hard to be the sympathetic young man that is, according to his Mama, “just a little slower than most.”

Not that trying to hard is a bad thing, some very good movies have been made by people trying too hard (see anything by Terry Gilliam), the problem comes in when the movie-goer continually notices how hard the person is trying.

But Gooding is not the only one guilty in this film of overreaching, the director, Michael Tollin (Summer Catch) also seems to expend a lot of useless energy.

In the film about a young learning disabled man in South Carolina that is befriended by the local high school football coach and winds up teaching the whole town about friendship acceptance and loyalty, Tollin not only pulls at the heart strings but uses them like bungee cords, yanking down on them with full force; but again, not a major disagreeable, just an occasional slight annoyance.

There is one part of the movie however that is a major annoyance; the soundtrack.

Intending, I suppose, to give more of a feel of the 70s the film makers pulled the play list of some classic rock station and plugged the songs in wherever they would fit.

The result is a mixture of songs by bands like the Doobie Brothers, Fleetwood Mac, BTO, etc. that have absolutely no connection to the movie.

If you can keep yourself from noticing Cuba Gooding Jr. trying his best to play a young learning disabled man, and from wincing as “We’re an American Band” blares during the high school football game, you’ll come out of this movie feeling just fine.