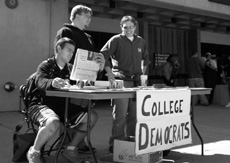 After a year of inactivity, the College Democrats now have new leadership and a plan for promoting political activism at Northern Kentucky University.

“Since we have reformed recently, almost every meeting has focused on how to get new members, how to get exposure for our group, and how to assist in local campaigns for the election,” said executive director Zach Wells.

The organization has focused its energy on the campaign for Kentucky gubernatorial candidate Ben Chandler since reforming earlier this semester.

They also plan to expand across the Ohio River and communicate with fellow College Democrats at the University of Cincinnati and Xavier University.

“We want to broaden our base and increase support for the Democratic platform,” Simpkins said.

In the coming months, the organization will begin to campaign for the democratic presidential candidates in the 2004 election.

Simpkins decided to reform the College Democrats this semester when he found that student interest was in favor of a comeback for the organization. Since the beginning of the semester, 95 students have joined the organization.

The organization consists of NKU students from a variety of different majors.

“We have a very diverse group,” Wells said.

“We are not limited to people from the Democratic Party,” Simpkins said. “We have had Republicans and members of the Green Party in our meetings before.”

The College Democrats held its first fundraiser on Oct. 29. Students could have “pizza for a buck,” get voter information and join the organization.

“It was very successful for our first event,” Wells said. “If this is only the beginning, I can’t imagine what it will be like down the road for us.”

“We have seen such interest and enthusiasm just since our reformation that our hopes for the future are high,” Simpkins said. “We can bring the message of economic opportunity, total equality, and security both at home and abroad that the Democratic Party promotes to the student body of NKU.”

The College Democrats also want students to know the importance of voting.

“Some students do not realize that their vote actually matters and that politicians make decisions that concern them,” Simpkins said. “We can be a bridge between a candidate and a student.”

The College Democrats are excited about the organization’s future.

“I would like to see us maintain a strong member base, be very active in local and national elections, encourage young adults to have an interest in politics and world affairs, and do all possible to get young people to vote,” Wells said, “(and) last but not least, promote the values and platform of the Democratic Party.”

For more information, contact the College Democrats at nkudems@yahoo.com.