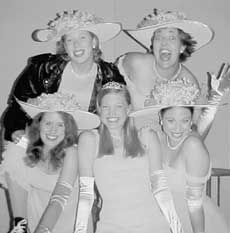 Always a bridesmaid and never a bride. Many women cringe when they hear that old adage.

Why? Because, as bridesmaids, women are forced to wear a smile all day and act joyous when, on the inside, they are saying, “She’s getting married, and I can’t even find a date.”

Worse still, bridesmaids are forced to wear the same dress, a dress that tries to mask their different personalities and to make them conform to the wonderful world of marriage.

The women in “Five Women Wearing the Same Dress” try not to let the dress hold their personalities in check.

Actress Amy Schwegmann explains: “It deals with a lot of real life situations – probably more interesting to the female audience.”

Northern Kentucky University’s department of theatre and dance brings an interpretation of Alan Ball’s touching comedy to the stage on Thursday, Oct. 30.

Ball’s work may surprise people who recognize his name from his dramatic works, “American Beauty” and “Six Feet Under.”

Director Sandra Forman has a small cast to work with, because the play has only six characters – the bride’s five sisters, played by Amy Schwegmann, Karie Miller, Rachel Rogers, Tracy Weiler and Kate Thompson.

Greg Hillner is the only man, who plays the cute usher.

The play is set in an upstairs bedroom, where each of the similarly dressed bridesmaids hide in an attempt to escape the proceedings below.

“Throughout the play, the audience will find out the reason that each of the women are hiding out,” Schwegmann said.

Schwegmann said that, even though “Five Women Wearing the Same Dress” is considered a comedy, it’s not the typical slapstick humor that many people associate with the genre.

Even though the play has a dark twist to it, it still is a good play with a great cast, Schwegmann said.

“Five women wearing the same dress” runs through Nov. 9 in NKU’s Black Box Theatre. Tickets for students are $6. For more information, contact the Theatre Box Office at (859) 572-5464 or by email at boxoffice@nku.edu.