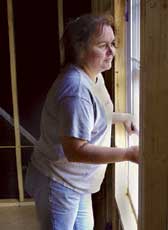 She doesn’t want to thank one person in particular but, rather, the people who helped build her house.

Those people are from Habitat for Humanity, the non-profit organization that helps people by building houses for them.

“They give a hand up, not a handout,” Daugherty said. “Low-income (families) aren’t asking for handout, they just need that little extra from somewhere from someone.”

“I just feel lucky that I got to be with this group of guys and girls,” Daugherty said.

Daugherty, 35, has lived in Latonia Terrace for the past eight years, she said. She is a single mom who is busy raising two children and working a full-time job.

Daugherty has not had an easy life. She lost her 10-week-old baby to Sudden Infant Death Syndrome (SIDS), which, according to Jama Patient Page website, affects more than 3,000 infants a year.

She said she was married to an abusive and alcoholic man, they divorced in 1988, and she said she is struggling to provide her children with a good life and a good education.

Daugherty said she attempted going to college at Northern Kentucky University in 1998, but had to quit so she could work more to allow her children the opportunity for a better life. “(You) just try to make sure ends meet, you have to be everything for everyone,” Daugherty said. “You have to work, clean the house, do everything on your own.”

Knowing that she wanted a better life for her children, Daugherty said she decided it would be best to move out of the neighborhood she lived in.

“I don’t want my daughter to go out and play sometimes,” she said. “The children are mean, they cuss and they hit, and that’s what they know because that’s what they’ve been taught.”

The students from NKU are giving Daugherty and her daughter that chance.

For three weeks many of students from construction management, as well as a few of the people from Greek Life, she said.have been working hard to provide a roof over her family’s head, in Latonia Lakes, an area that was quite different from the location where she lives currently, Daugherty said.

“If you look at it, it’s a house,” Daugherty said. “The Habitat people can’t believe that it’s come along so far, either. They wouldn’t know what it would be without NKU.”

Because the house is coming along quicker than anyone expected, Daugherty said she does not know how to express her gratitude.

“I have felt every emotion that can be felt – I’m overwhelmed,” she said. “I’m grateful to each and every one of those guys. It touches me. There really isn’t words to describe how I feel.”

The students’ dedication has taught Daugherty a valuable lesson.

“It restores my faith in humanity that someone would care so much about someone that they don’t know,” Daugherty said. “It’s wonderful.”

The house should be completed by December, Daugherty said. She said she knows that without the students’ hard work, her house would not be a Christmas present she’ll never forget.

“They’ve (the students) got a great outlook on life, I think, to do what they are doing,” Daugherty said.

“I want to, in the future, be able to do this for someone,” she added. “I hope they understand how this really touches someone.”