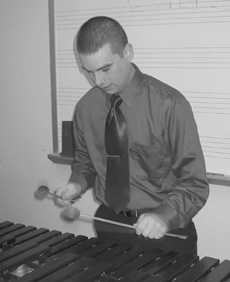 Jason Wagner is about to take another step on his musical journey.

Wagner, a senior music education major and winner of the Cincinnati Symphony Orchestra (CSO) scholarship and the Corbett Scholarship, will play in his junior percussion recital Sunday, Oct.19, 3 from to 4 p.m. in Greaves Concert Hall.

Wagner received both scholarships due to his academic performance, musical performance and involvement in university activities.

“I was awarded the CSO (scholarship) last year, which allowed me to sit in at a CSO rehearsal, go to a free concert and meet Maestro Paavo Jarvi, the conductor and music director (of the CSO),” Wagner said.

Wagner recieved the Corbett Scholarship through the music department, which granted him one year of full, in-state tuition.

In his debut recital entitled, “A Gift of Music,” Wagner will play a variety of pieces and percussion instruments.

He will play the majority of the concert by himself, except for one duo he will perform with his fraternity brother, Nick Little.

He will start with two marimba pieces, then a vibraphone piece, which will lead to his duo with the timpani trumpet and will end with a multi-percussion piece.

Wagner began his music career in his high school band.

In college he has been involved in many of the different ensembles offered by the NKU music department.

As a percussionist, Wagner is required to take three ensembles, and is currently working on his third, the steel drum ensemble.

“I’ve played in almost every ensemble in the music department, except jazz,” Wagne said.

Wagner has also done some things outside the classroom, including playing timpani for Holy Trinity Parish Catholic Church in Northern Kentucky and in Lloyd High School’s honor choir concert.

Wagner also sings sometimes in the Northern Chorale, one of the two choirs at NKU.

Wagner was interviewed by the Cincinnati Enquirer for being a scholarship winner and for being in the Army Reserves.

“I performed with the 100th Division Army Reserve Band based out of Ft.Knox, Ky.,” Wagner said.

Besides playing and singing, Wagner is also apart of the male music fraternity Phi Mu Alpha and a member of the NKU Community Orchestra.

Wagner is looking forward to graduating in May 2004, and he said he would then like to continue his music career by teaching middle school band and music programs.

Wagner’s recital is a free event with a reception to follow.