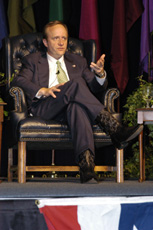 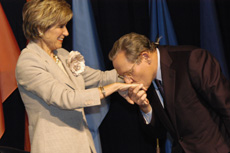 Government secrecy and changes in the media since the Watergate scandal was uncovered three decades ago were two topics discussed Oct. 2 by political and media figures Mary Matalin, Paul Begala and Bob Woodward at the fourth annual Alumni Lecture Series.

The three experts spent the day at Northern Kentucky University, participating in a book signing, a question-and-answer session for students, and an evening lecture entitled “Governing in America: The President, The Press and The People.”

“The danger in our country is secret government,” Woodward said, “when you have a small group of people in the White House making secret, important decisions that determine the course of action, particularly in the national security area. We are, in the media, spring-loaded to try to examine these things.”

Woodward and his colleague, Carl Bernstein, covered the Watergate scandal for the Washington Post. Their coverage exposed President Richard Nixon’s abuse of power, including spying on political opponents, and led to his 1974 resignation.

“It exposed the Nixon administration for what it really was,” Woodward said. “[And] it taught us that you never know what’s gonna turn up.”

Woodward, in response to a question by NKU student and College Republican Mike Tobergta, compared his thoughts on the dangers of secret government to an issue currently affecting NKU.

“Do you believe that information brought from another source can be used in an opinion piece in a published newspaper or magazine without having to go through problems with plagiarism?” Tobergta asked.

Tobergta was referring to Trey Orndorff, a fellow College Republican and vice president of academic and student affairs for the Student Government Association, who submitted to The Northerner a letter that was more than 60 percent identical to a column previously published by Front Page Magazine.com.

“Well, plagiarism is a bad thing in any case,” Woodward replied.

“The key, again, is going back to the premise of the idea of secret government,” he added. “The danger is secrecy, and if people get information from someplace, they should say – if they can – where it came from.”

Woodward later said he would have handled the situation in the same way as The Northerner.

“I would expose it [the plagiarism],” he said.

The Northerner published a news story on the incident in the Oct.1 issue.

Begala credited Woodward, a Pulitzer Prize-winning journalist and current assistant managing editor for The Washington Post, with changing journalism with his investigative reporting of Watergate in the 1970s.

“[Watergate] changed journalism, it changed government – in some ways better, in some ways worse,” Begala said.

Begala is co-host of CNN’s “Crossfire.” He was a senior strategist for the Clinton-Gore 1992 presidential campaign and an advisor to former President Bill Clinton. He is also a professor of government and public policy at Georgetown University.

Begala said the Patriot Act, which was enacted by Congress shortly after Sept. 11, 2001 as an effort to combat terrorism, is “part and parcel of an attitude of secrecy in the current government that is very troubling.”

“They don’t want you to look into these things,” he said, “and that’s an enormous problem for our government.”

Matalin agreed that the media should play a role in watching the government, but added, “The press paradigm in which we find ourselves today was launched by Bob Woodward and his uncovering of Watergate.”

Matalin, former assistant to President George W. Bush and current counsel to Vice President Dick Cheney, said one problem with the press is its tendency to cover the exact same issues.

She said this tendency, which she called a “herd mentality,” fosters competition between media outlets. She said it often causes breaking news to “take precedence over what is right.”

“The press instinctively moves toward the same news,” Matalin said. “It has a very powerful impact when they’re going in the same direction.”

Matalin said she believes the media, due to the pressures of competition, now spend less time researching stories and often present news that has less depth and accuracy than in the past.

These qualities, she said, are what have caused policy makers to be less open with reporters.

“We tend to be more scripted than [we] should be,” she said.

Woodward agreed the “herd mentality” has an effect on news coverage, especially coverage of the alleged leak of a CIA agent’s identity to the press.

“There is a bit of a feeding frenzy about it,” he said. “But there is a feeling in the media that we’re being stiffed, and anything that will get some investigative authority in there to examine what went on will achieve that accountability that most people in our business seek.”

Begala, referring to another story heavily covered by the media, said the California gubernatorial recall is “God’s gift to cable TV.”

“It’s a bad idea, because politicians have to make tough decisions as it is,” he said. “This will make it much more difficult.”

“In terms of the pure, well-oiled functioning of government, it looks bad to have a recall,” Woodward said. “[But] there’s something kind of pure and sweet about it that doesn’t disturb me, as a believer in the constitutional systems and accountability.”

The actions President Bush took to initiate the Iraq war were also discussed during the lecture.

Begala said he believes President Bush was mistaken in leading the nation into war with Iraq based upon the premise that Saddam Hussein was an imminent danger to America.

“I believe President Bush misled us deeply about this war,” he said. “I belived then and I know now that [Saddam Hussein] posed no threat to America. The President should not put our troops in harm’s way unless he’s sure.”

Woodward disagreed. “I think they went to war in Iraq for convictions – beliefs – that they had,” he said. “I disagree with Paul on this idea that the President, necessarily, misled us about the weapons of mass destruction. At the same time, there is a giant problem that they have not found them.”