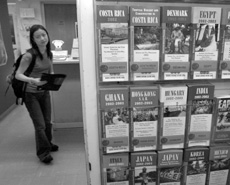 DENVER, Colo. – Just before our country went to war against Iraq, the National Geographic Society surveyed American college students and found that 87 percent could not locate Iraq on a map.

What a sad state of affairs. To many of us in education, however, it is not a surprise. Ignorance of the world beyond our borders has a long history in American culture.

Most Americans have never traveled abroad – even to Canada or Mexico. Geography has been de-emphasized in many schools. Only six percent of American college students study a language other than English.

For a nation fighting a global war on terrorism, we know frighteningly little about the parts of our globe that are not connected by U.S. interstate highways. This is not a time for Americans to turn inward.

We must learn as much as we can about our fellow inhabitants on this planet if we are to co-exist peacefully and prosperously with them in the 21st century.

We do not have to agree with or like everyone who is not an American.

We do have to know what motivates them.

And in the process of understanding other people we will likely find areas of agreement with them.

The late Arkansas Sen. William Fulbright understood this many years ago when he spearheaded the federal program for student and faculty exchanges with foreign countries.

Despite that well-known initiative, however, the Institute for International Education reports that fewer than one percent of American college students study abroad.

This is unacceptable. To be competitive in any field, students need global perspective and experience.

Virtually every four-year college and university in the country has an office devoted to facilitating study abroad opportunities for its students.

So how can it be that 99 of 100 college students never cross the border? Clearly, what is lacking is an institutional commitment that students study abroad.

A couple years ago we found that about 20 percent of our students at the University of Denver were taking courses in foreign lands.

That is 20 times better than the national average, but it still meant that 80 percent of our students stayed in Colorado the whole time.

We now have a goal that at least 60 percent of our undergraduates will study abroad.

To make it happen we have put in place a policy that allows eligible students to study abroad for the same fees they would have to pay to study on campus.

We also pay their transportation costs to and from the study abroad site. The program goes into effect for our juniors beginning next fall.

A few small liberal arts colleges have similar programs. But for the most part, larger comprehensive and research universities have allowed study abroad programs to languish.

The option is available for the self-selected few who seek it out, but typically it is not an institutional priority.

If it were, more than one percent of American students would be studying abroad.

To be fair, there are small and encouraging signs that U.S. colleges and universities are improving in this area.

A total of 154,168 American college students studied abroad in the 2001-2002 school year, the Institute for International Education reports, marking the fourth consecutive year of significant growth.

But it is still a drop in the bucket.

To put it in perspective, the total number of U.S. students learning firsthand about other nations and cultures could fit comfortably in just about any two of the football stadiums used by teams in the Big 12 or Pac 10 athletic conferences.

Colleges and universities need to make studying abroad a priority. Our future national security and prosperity depend on it.