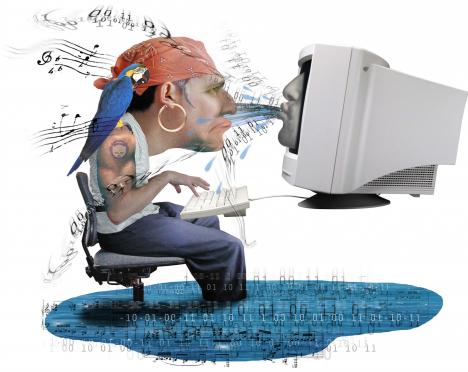 The defendants are accused of copyright infringement for exchanging and downloading copyrighted music over the Internet.

The lawsuits were filed against major offenders, which the RIAA defined as those with more than 1,000 copyrighted music files each on peer-to-peer networks such as KaZaA, Grokster, Imesh, Gnutella and Blubster and are the first of what RIAA said could be thousands more.

“Nobody likes…having to resort to litigation,” RIAA president Cary Sherman said in an interview with the Associated Press. “But when your product is being regularly stolen, there comes a time when you have to take appropriate action. We hope that today’s actions will convince doubters that we are serious about protecting our rights.”

“The recording industry, to the extent that they pursue these lawsuits, is certain to win,” said Ken Katkin, a Constitutional Law professor at Chase College of Law. “Much more of the question is whether they’ll go through with these lawsuits. The legal issues aren’t very hard. The problem that you have is it’s really more of a public relations problem. The RIAA is giving itself a black eye by suing the people they want to buy their records.”

RIAA now wants to work with universities to stop piracy on campuses. It has encouraged university officials to implement restrictions and issue warnings to discourage students from exchanging copyrighted music on university computers.

The organization also plans to subpoena universities for server records in the same way it subpoenaed Internet providers to gather evidence for the first round of lawsuits.

The debate over Internet music piracy has raged since the emergence of Napster in the late 1990s. RIAA and individuals within the music industry claim that people who download copyrighted music cause declining CD sales and steal from creators. Defenders of music downloading contest that the practice enables people to sample a wide variety of music before buying a CD.

“For me, all the music downloading programs don’t deter me from buying CDs,” Slone said. “It just feeds my CD addiction, so to speak.”

“As a musician, we work hard to get where we’re at,” Payola bassist Joe Seiter said. “You want people to buy your music. But I’m kind of both ways on it. If people are out there downloading your music, that means they like you, and that’s a promotion in itself.”

RIAA has been preparing for the lawsuits for over a year. In May, the organization sent instant messages to KaZaA and Grokster users to warn them against repercussions if they did not delete illegally downloaded files. RIAA began gathering evidence June 25 in preparation for the lawsuits. The organization then subpoenaed Internet service providers for the records of more than 1,000 filesharers.

Katkin said RIAA would win the lawsuits because copyrighted material is protected by law.

“There’s no real doubt about constitutionality,” Katkin said. “There may be questions about other ordinary laws, however. Copyrights are only protected under copyright law. The copyright law itself gives the scope of the protection. There’s not much controversy over whether the material is copyrighted.”

The only setback to the RIAA’s case is geography.

“One issue that’s come up in a few of the cases already is they need to file separate suits in all the states they’re trying to get information from. That will probably have to be done in all the different districts,” Katkin said.

He said the RIAA could dismiss suits they have already filed in order to re-file in the offender’s individual state.

“If they find the right courts to file in, they should be able to get any records they want,” Katkin said.

The RIAA also announced the Clean Slate Program, which offers amnesty to file sharers who identify themselves and agree to delete files they have downloaded.

In order to receive amnesty, file sharers must provide a signed and notarized affidavit stating they will no longer download copyrighted files.

Individuals who participate in the program are not likely to be sued by the RIAA, record labels, or musicians unless they continue to download copyrighted music, Katkin said.

This is because singers and songwriters usually give copyrights on their songs to the record label, therefore an individual musician could not sue a filesharer unless he/she owns the copyright, Katkin said.

The record labels that are RIAA members have authorized the organization to speak on their behalf and will be bound by that agreement and may not sue individuals to whom RIAA has granted amnesty, according to Katkin.

He said that filesharers “are painting a target on their faces and will continue to be monitored,” but that unless they continue to download copyrighted music, their chances of being sued are slim.