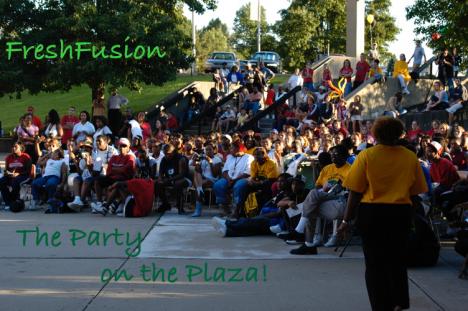 FreshFusion is the first opportunity for Northern Kentucky University students to acclimate themselves to college life, and the event keeps growing in size each year.

“[FreshFusion] brings to students an excitement, and an opportunity to see what Northern has to offer them and to become a member of our community,” said Tiffany Bellafant, a member of the planning committee.

Campus Life Team Director Steve Tribble believes that FreshFusion is instrumental in creating a bond between freshmen and the university.

“I believe FreshFusion is the most important student-focused event each year,” said Tribble.

“Through FreshFusion, students are exposed to the excitement and pride of being an NKU student,” he added. “They are encouraged to begin building school spirit within themselves and within their circle of influence. It is imperative that freshmen students are exposed to these types of events early so they may build upon their experiences and become emotionally connected to NKU.”

Committee chair Gennine Brewer attributed the growth of FreshFusion to tradition and word of mouth.

“This program is growing every year, partially because the tradition of the event brings more students out each year,” she said. “We usually end up with between 1500 and 1800 [attendees],” she said.

“Year in, and year out, this is the largest and most vibrant event on campus,” said Vice President of Student Affairs Mark Shanley. “[This] seemed to me as one of the largest turnouts we’ve ever had.”

The event took place Sept. 4 with the theme “Northern’s Amazing Race.” To kick off the evening, freshmen competed on four-member teams in a race that began at the intramural sports field, covered most of campus, and ended at Regents Hall.

A party in the University Center Plaza concluded the event. Students paraded around the plaza sporting balloon hats and snacked on free popcorn and Sno-Cones provided by campus organizations.

Student organizations played a bigger role in this year’s event, according to APB director Dustin Lewis.

“In previous years, FreshFusion was geared more toward programming different events,” he said. “But this year it was organized more by student organizations and University 101 classes.”

“The booths give you the opportunity to explore something new,” said freshman Christie Wrobleski.

“[FreshFusion] is a good thing to have. You meet a lot of people,” said freshman Jennifer Martin, winner of the TKE dance competition.

The event also featured entertainment. 2003 Battle of the Bands winner Payola played rock and roll music to energize the crowd.

The FreshFusion committee begins planning the event in February. The committee is composed of 15 members from various campus offices.