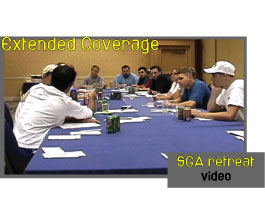 *Please Note :Quick time plugin require to view video on pc or mac. The plugin is available at: http://www.apple.com/quicktime/products/qt/*

SGA would like to achieve increased funding, the relocation of the Disability Services office, and more SGA involvement in activities programming on campus.

“We want student government not only in perception, but in reality, to be known as the top student governing board on campus,” said SGA President Chris Pace.

SGA received $15,000 for salaries and stipends and a $28,000 operating pool last year. SGA Vice President of Finance Joe Myers said this is inadequate for the organization’s activities.

The main argument for an increase in funding is the cost of public relations and ventures to get students involved in campus activities, according to Pace. He told Votruba that financial issues limit many prospective SGA activities.

“This is going to be a troubling time this year,” Votruba said. “We’re going to do everything in our power to make sure you keep every penny that you have. That’s where I am going this year. But I don’t know what the state is going to do, and that’s what’s scary to me.”

Senator Michael Tobergta presented the second SGA goal: to relocate the Disability Services office from the third floor of the University Center to the first floor. SGA members expressed concern that the third floor location is difficult for some disabled students to access.

“I think that it will show the community out there that accessibility is something we are looking at,” said Tobergta.

Votruba, in turn, pledged that the administration would “take a good close look” at the situation. He agreed to ask Ken Ramey, Vice President of Administration and Finance, to examine the logistics of moving the facility.

The third proposal brought the most dissent among SGA members and university staff. SGA members voted Friday night to “take a more active role in programming” campus activities. The proposal was submitted to President Votruba the next day.

During the Friday evening debate, the Activities Programming Board took the front seat. SGA members discussed the pros and cons of combining SGA and APB efforts.

“We’re the people who have to protect student money,” said SGA Senator Trey Orndorff, “[but] we don’t know what their budget is. How are they spending our money?”

Senator Jared Moore explained, “We don’t mean to be a dictator to the APB. We just want to coordinate their funds along with ours to a common goal.”

The majority of SGA members present voted Friday night to make increased SGA activity in programming events an SGA goal, although opinion differed over how closely SGA and APB should collaborate.

“Is there a way we can take a vote tonight not only on whether or not this is something we want to do, but whether or not we want it to be our third priority?” Lindsay asked. “I don’t see it as being important we give [it] to the president, I see us going to Student Life and we can make this happen without that, and we can do something much more productive if the president isn’t involved directly in it.”

Senator James Pollit argued that “everybody in SGA [is] not going to necessarily agree on [all issues] 100 percent. We have to be realistic.”

“We’re going to shoot for more funding,” said Senator Brandon Kiely, “but if that falls through, we have this to fall back on and say hey, this makes it easier to give us more money and let us share it in between us [and APB].”

“We’d like to have more say in the programming side-where the actual money is spent,” he added. He also said that the APB gets “more than twice the money we get.”

President Votruba asked, “You want to have SGA become the APB?”

After hearing reasons to support this initiative, Votruba told SGA to “work this [issue] out and write this up and think about it.”