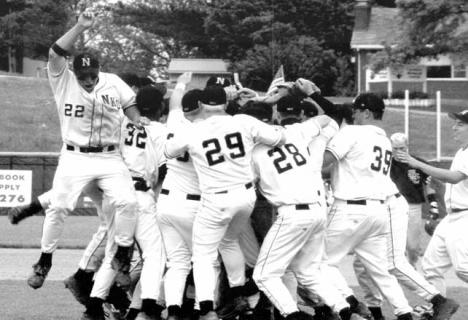 No respect was given to the Northern Kentucky University baseball team at the beginning of last season; they were left out of all regional and national rankings, and were picked to finish fifth in the Great Lakes Valley Conference. The Norse responded by posting a 37-24 record, going 21-8 in the conference, earning a national ranking and getting the respect it deserved.

Even though the Norse must replace five starters from last year’s team, including, Division II 2nd team All-American Steve Walton and GLVC Pitcher of the Year Lenny Bays, the team has much higher expectations than that of a year ago.

The Norse come into the season as co-favorites to win the conference crown, and a No. 18 ranking in the latest NCAA Division II poll.

One reason the expectations are so high is because of the pitching depth of this team. Although the Norse lost Bays, who was drafted by the Kansas City Royals, the Norse still have numerous pitching options this season. Returning is junior Chris Unkraut, who went 7-4 with a 2.63 earned run average last year. Unkraut, paired with newcomers Geoff Freeborn, and Mike Marksbury, both junior college transfers should form one of the toughest rotations in the conference.

The Norse also return sophomore Brandon Evans who emerged to be one of the brightest stars of last year’s club, finishing with a 5-0 record and 2.05 ERA out of the bullpen. Chad Anderson and Dizzy Peyton also return, and both should figure prominently in the success of the team. Two more newcomers Jeff Schachleiter and Justin Seiter also figure to be a big part of the Norse pitching staff.

“I learned last year that we needed more pitching depth in order to advance to the next level,” said Asalon. “We feel real good about this group of pitchers.”

The Norse offense is going to be the biggest question this season, as it has to find a way to replace four players who were named to All-Conference teams. You can start by looking at the middle of the lineup; to what Asalon says will be one of the “keys to this season.”

Erie last season hit .352 and scored 60 runs, as well as breaking the record for hits in a season for NKU with 83. Shortstop Chris Osterkamp also returns after leading the club defensively on the field last season and posting a .326 batting average.

Two more transfers are expected to help in the infield. Jerrod Fraley from Sinclair Community College, will take over the reigns at first base, and Josh Perkins from Southern Indiana, should contribute at third base.

In the outfield the Norse return junior Lewis Jones and sophomore Keith Jackson, both saw significant time last season and figure to get much of the playing time this season.

One of the keys to success of the baseball program since Asalon has taken over, has been the interest in local talent wanting to play at NKU.

“When I came in,” said Asalon, “one of my goals was to keep the local kids local. The success we have had the past two years has helped with that, because obviously if we are winning there is going to be some interest in wanting to play here.”

This season’s roster is proof that Asalon has accomplished his goal of keeping the local players around. Of the 34 players on this year’s roster, 25 of them played high school baseball in the Cincinnati area.

“We’re lucky to be in a good area,” explained Asalon. “Cincinnati is a wonderful area for high school and summer baseball. We just are lucky to be able to see so many talented players in the area.”

Asalon believes that this team will repeat as conference champions, and advance further into postseason play. “Last year was a surprise,” said Asalon, “when we went out, we kind of hoped to win. This year we really expect to win.”