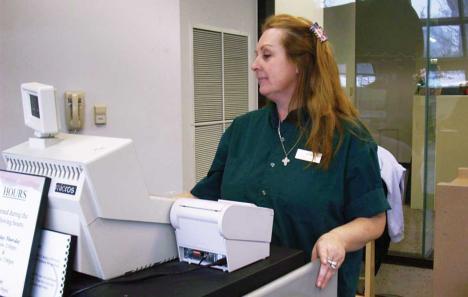 Graduate student Tommy Martin doesn’t like the reduced hours of the food carts this semester.

“We hate it. It sucks,” he said. “I tried to contact Sodexho but got a message machine and never heard anything back from them.”

Martin is upset that the Movable Feast food carts in the Steely Library and BEP now are only open until 2 p.m. The carts then reopen at 5 p.m. and close at 7 p.m. They used to be open all day until 8 p.m.

Sophomore Desera Favors is one of the workers at the Steely cart during the 5 p.m. to 7 p.m. cutback-affected shift. She described the cutback as “brutal.” She said it strikes her hard, losing two and one half hour’s pay a night, but that she understands it.

“There’s not much traffic between two and five,” she said.

Sodexho Dining Services Director Andy Meeks said, “It is not a permanent change.” He said the hours were reduced because,”The bulk of students have come through by 2 p.m.” He also said that he had only received one complaint, which was from a professor.

Cart worker Mary Stidham said she has had many complaints about the hours and the food service. She said she would be willing to work extra hours to better serve students. She is very concerned about hungry students, professors, and visitors. She said a big complaint is the food at her cart, or lack thereof.

“Around 11 a.m. we need to be restocked. No one calls to check on supplies. ” Stidham says. “I have tried to get help.”

She referred to the depleted food stock at around 1:30 p.m., “No sandwiches, only four parfaits…”

She said this is common.

She said many people have asked about the hot soup, which is no longer offered. When she asked about it, Dining Services said the soup was no longer available. She found this answer unsatisfactory.

Stidham said she apologized to the complaining students and said that she wanted to make things right. She delivered a letter to Meeks. “I made it clear,” she said.

She felt that she has not had a response.

Stidham has been in food service for twenty-two years, mostly at hospitals. She said she knows how the business works. She said she has had very little problems at any other place she has worked, and that the problems were addressed immediately.

Junior Chris Biltz has noticed there are a lot less people hanging out in the library loggia now. She is confused by the change.

“It makes no sense to me. They take the time to shut it down, then they open it back up. They might as well stay open,” says Biltz. She wonders why they close the carts during finals, when she sees that people need food and coffee “as much, if not more, than any other time.”

She, too, is troubled with the lack of food at the carts. “They’re not serving students. They either need to restock the cart with food or the university needs to provide vending machines that have sandwiches.”

Part time English Professor Pat Curran says that the hour changes have impacted her. As a part time professor, Curran doesn’t have an office of her own. She said that it is too difficult to lug her heavy books and materials from Landrum to the UC to find something to eat. She only has minutes between the classes she teaches. She had come to depend on and really appreciate the food cart, but the time she has to eat falls in the reduced hours.

Curran misses relaxing into work in the library loggia over coffee. She reminisced about the no longer offered hot soup. “It was nice in the winter months, while nursing a cold.” She said she knows of many English professors who would use the convenient food service if it was more substantial. She hopes the hours are restored.