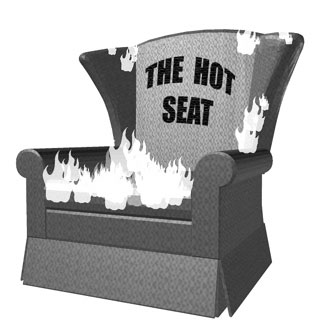 EH: Who is the better coach: Tubby Smith or Ken Shields? SR: I’d have to say Ken Shields, because he has over 700 career wins. And the Norse have 19 wins and I don’t think the wildcats have that yet.

EH: Do you think college athletes should get paid? SR: Most definitely. It’s either that or have the colleges make money off of the athletes by selling their jerseys and all that.

EH: Did you get a Hummer from your mother in high school? SR: I got a 1988 Chevy Celebrity. Black with red trim and barely ran. Every time I’d go to start it, I’d have to wait ten minutes before it started. That lasted three months before it died.

EH: I hear you like Notre Dame football. Are they going to win the NCAA championship next season? SR: Most definitely. They are back! The return to glory! They have the coach, the top five recruiting class and Ohio State was a fluke this year.

EH: True or False: You should be a starter on the basketball team? SR: False. I can’t jump, I’m slow, I’m not athletic and I can’t shoot.

EH: True or False: NKU will win the NCAA Division II national championship in basketball this season? SR: True. We’re the best team in the country.

EH: Should women be allowed in Augusta? SR: No they shouldn’t. I don’t know much about golf, but I know they haven’t been allowed in so many years and I don’t know why they would start now.