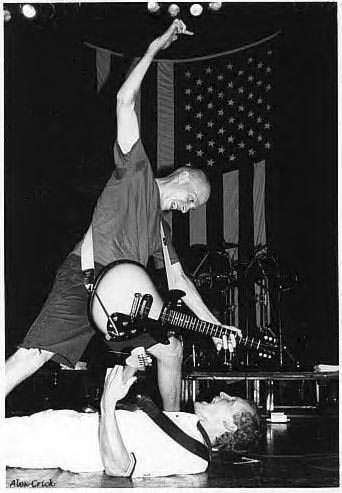 Welcome back to this semester’s first column of Buried Alive. I was fortunate enough to have an interview with the Presidents’ front man, Chris Ballew. You might remember them from a multitude of hits they had in the 90’s, “Peaches,” “Lump” and “Cleveland Rocks,” to name but a few. Truly unique (in a good head-bopping way) and very influential artists. This interview is unfortunately a month late or so in coming out since I misunderstood when the last issue of The Northerner was to run. So when he says early next year, you can expect their re-released CD out any day now. Also the band is officially back together and many tour dates have already been arranged. Question: Describe yourself in three sentences.

Answer: I am obsessed with sound. I love sound. I want to be making music when I fall over dead.

Q: How do you look back on the Presidents?

A: I was not into it for a while there at the end of our run so I had a bit of a sour taste in my mouth for a while. Now that I have my own composing business and four or five bands under my belt since we broke up I am happy with what we did. So happy that I have agreed to do a bunch of shows with those guys again. Q: I heard the band now owns the rights to your first recording. What are you planning on doing with it? A: We are planning to re-release the first record with anywhere from one to five news songs either on the same CD or as a little EP that goes along with it. That will be after the first of the year so if there is anyone out there wondering where their original copy went and thinking about replacing it….wait!!

Q: What’s are you working on?

A: Right now I am doing music for a show on Fox called Oliver Beene with Tad my writing partner. We have a band called the Chris and Tad show too. He plays a little drumset and I play the organ AND the guitar AND the harmonica AND sing. Whew. Tad sings too and plays a tiny marshmallow button keyboard called ORGATRON 1. Lots of looping and breakbeat creation going on in my home studio…trying to pull a bunch of instrumental stuff I have been doing into an album form that I will sell on my soon to be finished Web Site.

Q: What song have you done do you connect with best? A: Lump.

Q: If you had an action figure what would be its special feature? A: Sleeplessness.

Q: Who do you still look up to musically?

A: All these new cut and paste beat creators….Fat Boy Slim, the Wiseguys, Ursula 1000, Tipsy, the Avalanches….that stuff pushes the guitar bass drum thing in a healthy direction.

Q: What’s the answer to a question you never want to be asked?

A: Well, we got the name “The Presidents of the United States of America” when……..

A: All the above mentioned people and my friend and family….they steer the ship.

Q: Anything that constantly blocks your creative flow?

A: Being tired….little kids are so cute but they will get you up in the night like nobodies business….wish I could just A.sleep for a year B.never sleep.

Q: Where are you heading musically?

A: More sampling….cutting looping…I got a CDJ100 machine because Sir-Mix-a-lot said I had to and it kills….I am warping all my own old recordings and coming up with fresh sounds that way too. More sound manipulation and more computers…I am building a mobile version of my home studio so that when I am on the road I can be creating beats and what not. First album by me (Caspar Babypants) out soon.