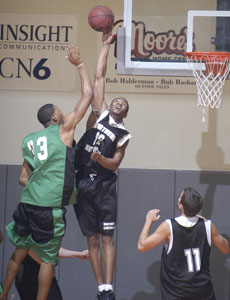 Mike Kelsey added 12 points for NKU, which improved to 4-0 overall, 1-0 in the Great Lakes Valley Conference. The Norse shot 61.5 percent from the field in the first half to build a 45-32 lead at intermission, and NKU coasted past the Hawks (1-1 overall, 0-1 GLVC) in the second half.

Chris Seabrooks finished with 10 points and five rebounds for NKU, which made 27 of 33 free throw attempts. The Norse forced the Hawks into 22 turnovers and won despite Quincy’s 37-24 rebounding advantage.

NKU holds a 14-1 lead in the all-time series with Quincy, and the Norse are unbeaten (7-0) in Regents Hall against the Hawks.

NKU will play host to the University of Missouri-St. Louis at 7:45 p.m. Monday in Regents Hall