BMX with an adult twist 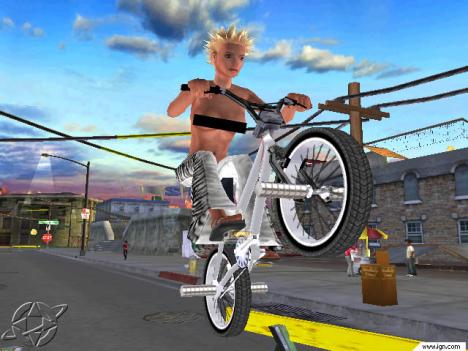 BMX game play, this game really works for the target audience, which has to be males between the ages of 18 and 34.

In BMX XXX, the game play is excellent. As I haven’t played too many BMX games, I was afraid it would be very difficult to pull off some of the upper-level tricks. Yet I found that I was pulling off sweet tricks, like a 720 superman, in no time. Each level provides 20 timed challenges that are both entertaining and addictive. However, the challenges have little or no explanation causing you to take some time to figure out exactly what they want you to do. Aside from the challenges, the game play offers numerous ramps and rails to experience while riding around the level, which itself is untimed.

With all the hype out there surrounding this game, I honestly expected more. However, this game still provides a very worthwhile gaming experience, especially for BMX fans. With just a few minor changes, including better explanation of challenges and improved graphics, this game could have been one of the best on the market.