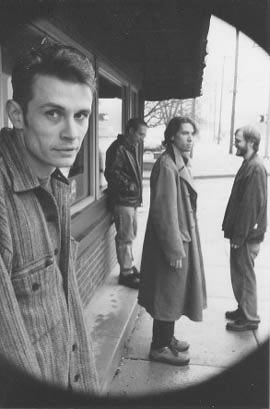 This week for Buried Alive I get the chance to visit the mind of Justin Lynch. Justin Lynch is the leader of the band Wojo. He describes Wojo as a stew of British Invasion and post-punk, with a little Rhythm ‘n’ Blues for flavor. I would describe their music as incredible. Wojo is another talented local band that are going unappreciated. The members of Wojo recently changed their lineup in June although Justin and bass player, Aaron Zlatkin have been performing together for over ten years. Wojo is currently working on their second CD titled “How to try Without Succeeding,” which they hope to release by late spring of next year. So check them out and if you hold a negative opinion to anything local let Wojo help change your mind.What’s your dream as a musician?To make an honest living making music. To write meaningful and listenable music. What are your influences?People I know, local history, fiction writers like Kurt Vonnegut and Tom Robbins, News of the Weird and almost every musician I encounter one way or another.If you could tour with any current band who would it be and why?It’d probably be Luna. We have a similar bent and I strive to be as absolutely laid back as Dean Warham.How do you write your songs?The million dollar question. Um, very selfishly, I suppose. I usually don’t include the other members in the writing process. I think it’s a private thing, like a conversation with oneself, like meditation. I also think it helps to censor and edit out the cheese and crap. Other than that, I use a black ballpoint pen and a notebook and more often than not an unfamiliar guitar.Tell me a story!There once was a journalist who misused exclamation marks. His editor cut off his fingers and he died penniless.Why the music route?It chose me. I’ve always written something – fiction, cartoons (I drew for the Northerner from 1996-98), reviews. I guess I like the immediacy of performing something I wrote. Also, I enjoy singing and you can’t sing an editorial cartoon. What’s in your CD player right now?The Black Crowes “Southern Harmony Music Companion,” a Radiohead bootleg of the Cleveland show I saw last year and The Beatles “Please Please Me.”What’s your greatest challenge as a musician?To not absolutely murder other musicians who disgrace the craft. Tell me a little about your band mates.Our guitarist Mike is an eBay whore when it comes to guitar stuff.Aaron plays bass better than most people breathe. Jerry Matt is the sweetest, kindest drummer you could have. Upcoming chances for enlightenment on:Sat. Oct. 26 – Southgate House (w/SamNation, Filthy, and Johnny Dowd)Sun. Nov. 17 – Southgate House (w/Mercy Woods, Staring at the Sea, and more)Fri. Dec. 20 – The CometOr you can go the digital route at their website: http://worldwidewojo.com