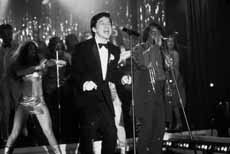 Where there’s Jackie Chan there is crappy acting,, but now they have added another element to the concoction by the name of Jennifer Love Hewitt. Could it get any worse? The Tuxedo starts out as Driver Jimmy Tong (Chan) is recruited to be the driver for super spy Clark Devlin (Jason Isaacs). On the way home from a mission briefing at Burger King (yes, that’s right) Clark and Jimmy are attacked, by a group of gangsters from the bottled water industry, with none other than a skateboard bomb. Yes at this point I was sitting in my chair in the theater wondering why I had wasted my eight bucks. Sadly that isn’t where the movie ends.

Master spy Devlin gets injured in the explosion and asks Jimmy to find the “Water Strider”. A bug that the C.E.O. at Banning Water Inc. is going to use to contaminate all America’s drinking water, so that “Banning” water will be the only drinkable source of water. This is the actual plot. In no way am I fabricating anything. Devlin’s spy headquarters (the CSA) has no knowledge of his recent injury so they continue on with the mission to Stop Diedrich Banning (Ritchie Coster) from undertaking on his diabolical plan. The CSA also has no clue that Jimmy is the one doing all the Spy work. So they team him with Del Blaine (Jennifer Love Hewitt) and before long they are a team.

Hewitt plays the “I’m smarter than you, serious all the time, I am better than the world” characte, which isn’t really a far fetched character for her. Before long they are doing all the normal spy things; Going to parties, video surveillance, killing James Brown.

In my opinion this movie is a really bad attempt to capture the “Rush Hour” market without using Chris Tucker. Not only that, but this was the most poorly written movie I have ever seen. This movie was so hard to follow at times I had to turn to the person next to me and ask him if he knew what was going on. Needless to say he was as dumbfounded as I was. If anyone is contemplating going to see this movie please don’t. Just go to your local video store and rent ‘Rush Hour’, or better yet, turn on the public access channel.

Usually I can tolerate Jackie Chan movies, Simply because during the credits they have all the mess-ups and bloopers. But in this movie even those were bad.