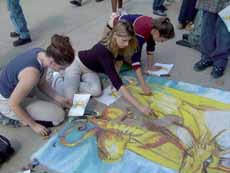 A yellow dragon looking out across a blue sky attracted a small crowd when it appeared on the gray concrete walk outside of the art building Monday.

Some people stared while others took pictures.

But, instead of swooping out of the sky breathing fire this dragon appeared in sections from pieces of chalk wielded by the skillful hands of NKU faculty and students.

In the background the NKU Musical Theatre Tour Troupe performed while passersby sat for portraits.

The groups were gathered on the plaza for “20 Days ‘ 20 Nights of Enjoying the Arts in Cincinnati (20/20 Festival)” sponsored by the Music, Art, Theater and Dance Departments and Enjoy the Arts.

From Sept. 24 through Oct. 13, Enjoy the Arts is sponsoring events celebrating a variety of art forms in conjunction with their 20th anniversary.

The event at NKU featured groups such as the NKU Chamber Choir and Jazz Ensemble as well as printmakers and painters.

The Cincinnati Chamber Orchestra also played in Greaves Concert Hall in the evening.

“This is a little weird [performing] out here,” said Aaron Lavigne, an Acting major and member of the Musical Theatre Tour Troupe who sang and danced in front the University Center.

He said events like the 20/20 Festival help bring the arts to people who normally wouldn’t think about them on campus.

“It makes me want to go back to be an Art major,” said Joseph Conger, Chair of the Theater Department, who helped organize the event.