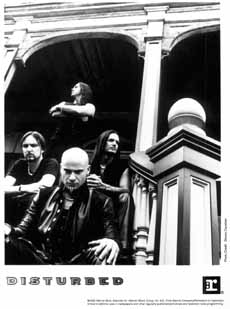 When bands release their second album, there is always the threat of the “sophomore jinx.” Whether it is with poor CD sales or bad and drastically different music and style. This, however, is not the case with “Believe”, the latest release by Disturbed.

After the success and great metal sound of “The Sickness,” the expectations for “Believe” are high. With the new release, Disturbed steps up and jacks one out of the park.

Although not as hard as ” The Sickness,” the new release showcases the true talent of the band. It also shows that lead singer, David Draiman, is more than just animal noises, considering you don’t hear them until the sixth track on the CD.

The title track gives testament to the slightly different sound. It has a little more actual singing, and less of the loudness that the metal genre is known for. The song sounds deep especially during the first chorus, “Penance can’t absolve your sin/ All your belief cannot absolve your sin.”

The first single to be released off the CD is quite possibly the best on the entire album. “Prayer” is as loud and hard as the songs on the first album. Lyrics like, “Living just isn’t hard enough/ Burn me alive inside/ Living my life’s not hard enough/ Take everything away,” makes you want to sing along and stand up and shout.

The final song on the CD, “Darkness,” leaves Disturbed with several directions to take their next release.

They can take the heavy approach or the mellow approach, either way it sounds awesome. It is by far the mellowest sounding Disturbed song ever.

“Believe” lives up to the previous hype, fans of Disturbed will enjoy this release

Disturbed is set to begin touring on the Pop Sux! Tour with Korn in October. However, the tour is not scheduled to come close to this area, hopefully more dates will be added so we can see the boys from Disturbed. For more information on Disturbed check out their website, disturbed1.com.