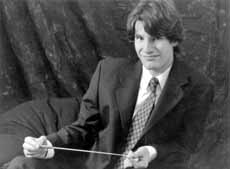 From a beautiful quaint town in Switzerland to Downtown Cincinnati comes Music Director Mischa Santora for the Cincinnati Chamber Orchestra.

Santora has been in Cincinnati for two years now and he is very excited about the upcoming concert series on Northern Kentucky University’s campus in Greaves Concert Hall.

Growing up in Lucerne, Switzerland was the ideal place to grow up, said Santora. There were no class differences. You could not tell who was wealthy and who was poor, he said. Our parents drove the same kind of cars and shopped at the same stores, he said.

Santora first attended college in Berlin studying the violin for three years. He then came to America to study in Philadelphia for five years at the Curtis Institute of Music.

When Santora developed a hand problem after his first year in Philadelphia and playing the violin became difficult and he then tried conducting. Going into conducting was not exactly planned, he said, “It’s just one of those odd twists of life.” Santora still plays the violin, and he also plays the piano, “but only in private.”

Straight out of college, Santora’s first job was with the New York Youth Symphony for five years. There was a lot of pressure in this job, he said. He spent the next two years at Juilliard School.

Even though Santora chooses the pieces he wants to conduct he cannot pick his favorite piece. “It’s impossible,” Santora said.

The upcoming performances at NKU will be very exciting, said Santora. “NKU is very helpful and supportive,” he said. The connection that the Cincinnati Chamber Orchestra and NKU have started is extremely beneficial, he said.

Santora is thrilled to be at NKU and is looking forward to the season. It is also nice to get to know the community, he said. NKU is a high level academic environment and last years crowd was terrific, he said.