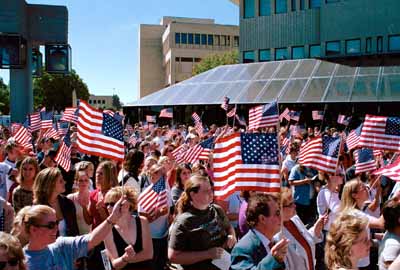 “We are a people who, when confronted by challenge, always seem to stand up, never stand aside,” Northern Kentucky University President Dr. James Votruba said at a campus memorial ceremony on the one year anniverary of Sept. 11.

NKU students, faculty, staff, alumni and community members gathered outside the Steely Library to remember the innocent victims of the World Trade Center, the Pentagon, and Pennsylvania attacks.

The ceremony began with the National Anthem sung by Paul Kreider, Department of Music Chair, and played by NKU Symphonic Winds and Concert Band conducted by David Deitrick. The American flag was then raised up. As Chuck Korzenborn, Sheriff of Kenton County played Taps, the flag was lowered to half-mast.

President Vortuba introduced the first speaker, Richard Patterson, Executive Director of Disabled American Veterans. Patterson received a Purple Heart and a Bronze Star for serving his country in the Vietnam War and he wished to express his sympathy and prayers.

Everyone must voice “never again,” Patterson said. “Past Americans paid the price so that future generations may live in peace,” he said.

Gary Toebben, President of Northern Kentucky Chamber of Commerce also spoke to the large crowd. As he recited, “America the Beautiful,” students, professors, faculty and community members watched and listened quietly, many with tears in their eyes.

Adriana Galarza, Freshman Business Major, was working for American Airlines on the morning of Sept. 11, 2001. She remembers people calling to find out about loved ones. She had a passenger list but wasn’t permitted to give them any information. “It was horrible,” she said

Adam Fuller and Mary Clair, Lieutenants for Central Campbell County Fire Department, said the ceremony was emotional and they were glad to see everyone coming together.

“This sends a powerful message for us [public service officials] to do what we do,” said Jeff Dektas, sergeant and assistant police chief for the City of Wilder. The job really pays off with the citizen’s support, he said.

Votruba addressed the crowd urging them to value and rededicate themselves to the “American Dream.” America’s strength is to be found in its people,” he said.

Tom and Kate Williams, NKU alumni, lost their son, Brian Williams, in the WTC attacks. The Williams’ attended a memorial service in New York City. NKU welcomed Brian’s grandparents, Tom and Florence Burke, and other family members to the ceremony.