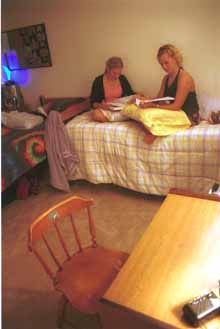 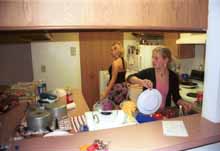 This semester continues to be plagued by over crowding in Northern Kentucky University’s Woodcrest apartment building.

To alleviate the problem, Assistant Director of Student Housing Sheila Murray, rented apartments at the Highland Ridge complex off Sunset Road. The apartments will continue to be leased until the new dorm is built.

“Highland Ridge apartments had the number of apartments that I needed… and they were willing and co-operative to help us out as far as the rental rates go and getting those apartments ready in time for my athletes to move in,” said Murray.

Josh Perkins and Ben Wrobleski, two students living in their Highland Ridge apartment, said there are two-bedroom apartments with four people living in each one. Perkins and Wrobleski share their apartment with two other roommates.

They say they enjoy such amenities as a dishwasher, washer and dryer, stove, refrigerator, walk in closet, pool, and a tanning bed, which is free. However, the students living at Highland Ridge Apartments had to supply their own furniture

They both said that they “love it here.” “There’s plenty of room here, compared to the dorms,” Perkins said. “Even with four people living here.”

The rules that apply to the dorms on campus are also enforced at the Highland Ridge apartments.

Whether the issue is drug and alcohol use, disorderly or threatening behavior, cleanliness and sanitation, property damage, personal behavior, rape, smoking, solicitation and unauthorized room changes, they will be disciplined according to campus rules.

Meanwhile, students at Woodcrest apartments are still dealing with overcrowding and remain unhappy. Students like Amy Kaiser were especially dissatisfied since the Norse athletes are bestowed much more than the students in the Woodcrest dorm where she lives.

“I don’t think it’s very fair. They get luxuries, plus some of them are getting scholarships paid to go here. They basically get free room and board here at NKU,” said Amy. “They get a washer and dryer and an oven, among other luxuries.” “They have it pretty good, especially with what we’re living with compared to them,” added Amy.

“We have 3 people in our room right now here at Woodcrest,” said Amy. “It’s pretty crowded.”

“If they’re going to give us a room they should at least try to put 2 to a room.” “3 is to many.” “We bump into each other and run around annoyed at each other as well.”

“You have to get up much earlier in the morning to get in the shower,” said Amy. “It takes up a lot of unnecessary time,”

Brandon Lockhart, who lives at Woodcrest said that he shares a suite with two other students. The apartment is only meant for two.

“It can be uncomfortable,” said Brandon, “Its too many people in one dorm.”

The overcrowding, though, is limited to the Woodcrest apartment dorms, students, have said.

Though problems like these still remain, Murray said University Housing is aware of the problems.

Construction crews have already broke ground for the new dormitory The new dorm is scheduled for completion July of next summer.

“The building itself is state-of-the-art technology very similar to the new science building,” said Murray.

“There’s a computer lab, there’s classroom space for programs and entertainment type things,” said Murray, “It will be a really nice building.”

Murray said that that in addition to the new dorm being built, there will be a new pavilion for the outdoor recreation center. It will have a grill and tables.

“We want to keep students on campus, Murray said.

“We want to respond to their needs and give them options and more opportunities to get what they want.”

The university will continue a program that was implemented las January. It is called “Squatter’s Rights” and students really enjoyed it, according to Murray.

“The people who wanted to stay in the same rooms had’squatters rights,’ and they were the first ones on the list.”

They got to pick their rooms. Murray said returning residents who wanted to change rooms or roommates got second pick.

“We kind of made it a party atmosphere and so the students who were returning got some rewards, ” said Murray.

“We value them as customers and as students to give them the opportunity to choose what they wanted to,” said Murray.

In reaction to an article published April 17, 2002, Murray reiterated her commitment to the students and said there’s been a lot of renovation in the dorms this year.

Not only were new carpets installed, but also new furniture was put in the lobbies, she said.

Murray added that work on a new fitness room would be completed as soon as all of the equipment was delivered and the new stereo system was installed. The new fitness room is located in Norse Commons, where the old recreation room used to be.

Murray also said that a new entry system had been installed on the doors and that new refrigerators, new desks, and new dressers had been put in place.

“Of course, we can’t do every single place at one time, but we’ve done wing by wing and tried to identify some of the issues.

“We will continue to do a lot of these renovations and improvements over Christmas break,” said Murray.